A quick report from David and a couple of our Glasgow Angling Centre staff's recent trip to Harelaw Fishery and Coffee Shop.

It was my first trip to Harelaw this week along with a couple of my colleagues, Euan and Stephen who is a regular on the fishery. Set on moorland in the hills above Neilston it's a beautiful bit of water, with a handy coffee shop to grab a drink, a meal or a snack while you're getting set up.

Built in 1844, Harelaw covers 102 acres and includes over 3 miles of superb wading banks, 4 dam walls, and three islands. It's a pretty shallow water, averaging depth of 5-9 feet and a maximum dept of 13ft. This means there are fish to be found all over the fishery and it fishes really well with floating lines or midge tips through most of the season. Catch reports in the last couple of days show a boat returning 30 fish with all of them coming to small CDC dry flies.

We started with a cold light breeze and bright clear skies, ideal for setting up a nice drift but keeping the fish down a little. Euan and I started with a blob and buzzer using a fast retrieve to try and stimulate some quick takes. After a couple of drifts the tactic picked up fish that were willing to chase, both of us had Trout bow waving and bumping our flies although nothing stuck. With the fish on the feed and looking to chase we swapped over to pulling patterns. I picked out a White Bunny Leech and Euan went for a Pink Snake.

Straight away the fish were back on the fast retrieved patterns, I had a take then Euan hooked and lost one before we both got fish to the net.
The pressure's off once both the rods in the boat have a fish so then it was a bit of friendly competition and a chance to beat Stephen on his own water.

Euan had two on in quick succession, I landed one then hooked and lost a couple but then I lost the Bunny Leech too. I had a hunt around the lure flybox, tried a few standard marabou patterns but they weren't what the fish were after so after a fruitless drift I borrowed a pink snake off Euan to get back amongst them landing one and losing one before the weather closed in.

With the weather closing in Stephen headed back to shore, the wind was high and it was baltic with  heavy rain coming down. We stuck it out though, using the drogue to keep us at a decent speed and hoping to get a couple of drifts and try to make sure we'd beat the local. 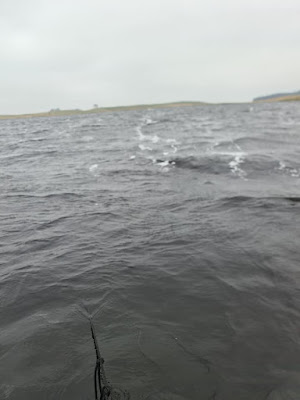 With the final scores at 4:3:2, the fairweather fisherman had to admit defeat although he's promised even the scores on our next trip. I'm looking forward to getting back out on Harelaw, with the warmer weather and evening sessions I can't wait to get up there when they're on the dries and we can test out the cafe too. 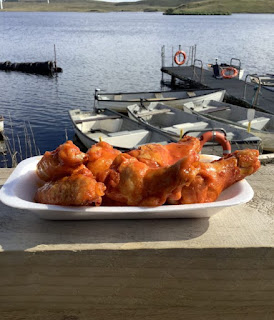