Nymphing on The River Tummel


So on a recent Monday morning Cuillin and Callum from our Edinburgh Store headed to the River Tummel in the hope of landing a few more Brown Trout before the season ends, and with a bit of luck, Callum’s first Grayling.


They started off the day just outside Ballyoukan after picking up permits from the Ballinluig service stop, and with nothing rising they both decided to start swinging a team of wet flies down and across fairly fast flowing water. Callum was first off the mark with a beautifully coloured Brownie that took a liking to the hares ear spider he had as his point fly. 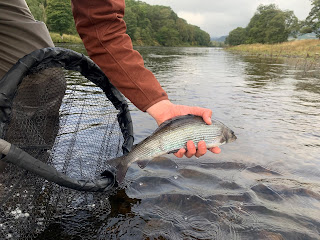 Cuillin didn’t take long to get amongst the fish either, landing two Trout and a nice Grayling in quick succession. His first fish came on swung wets, and the other two as he switched to another rod set up with the trio; a buoyant dry fly on the first dropper to act as an indicator, with two heavy tungsten nymphs spaced equally below.

This method can be deadly in the right conditions due to the fact that you’re able to drift your nymphs deep and at range, even in fast water, watching for the inevitable plummet of your dry as a Trout snatches one the nymphs below.

The trio had worked well for Cuillin and accordingly Callum switched over to the same set up. Shortly afterwards Callum had two nice Trout and was pleased with his success on a method that was new to him.

As they’d now covered a good amount of water, they decided to walk downstream to see if they could find some faster water for Cuillin to run through on a French Nymphing set up.


This method involves suspending a team of nymphs under a ‘sighter’, a coloured section of mono used for bite indication, and fishing them under the rod tip. This allows you to dead drift your flies through fast water, striking at any movement on your sighter.


Cuillin took another two small Brownies and dropped one, so they decided to walk back upstream to the slower water in the hopes of finding a few more fish for Callum before the end of the day.

Unfortunately the bite died off and interest in any tactics seemed to have disappeared by this point, with just one more one more fish coming to a wets swung down and across through faster water.

Overall it was a very enjoyable day, with success on a variety of methods, and Callum's looking forward to another chance at catching his Grayling over the winter period.