Tips and Techniques for Catching Tench 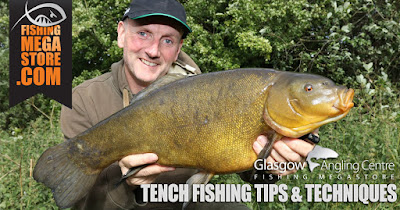 With summer well and truly underway, this is the perfect time to bag a tench. But if you are a seasoned carp or predator angler, how do you go about landing your first tench? Here are a few hints and tips to help you catch your first 'tinca.'

Believe it or not, in terms of weight, tench equal carp and barbel for their fighting power, and the male tench, which have larger fins, can put up a significant fight.

One of the critical aspects of tench fishing is understanding their habitat. You can locate specimens in clear waters where dense weed beds promote rich, natural food larders. Also, look out for features such as bars, plateaux, islands and margins where they feast on tiny snails and other sub-aquatic organisms such as bloodworm.
Tench can easily be caught using large baits intended for carp, however, smaller baits that mimic their natural food menu can often produce more bites. For example, crunchy little casters are unbeatable; as is hemp. Tench also love sweetcorn.

With regards to gear for tench, make sure it is balanced, and you will reap the rewards of the scrap far more than if you were to target them using carp tackle. To this end, using a lighter Avon rod, specialist rod, or even a pellet waggler balanced with a medium-sized reel loaded with 6 to 8lb monofilament is ideal.

In locating tench, tiny fizzing bubbles are a tell-tale sign that tench are on the feed and nothing beats catching them with sturdy float gear.

Hook size very much depends on the bait used. For example, use a size 16 for caster or maggot, and size 10 for 6mm pellet, bread, lobworms and double corn.

One of the most popular approaches for catching tench is using the lift method float rig. To set up a lift method float rig properly, make sure you plumb the depth accurately and then slide the float up to the line (from a few inches to over a foot). You then need to place some bulk split shot the same distance from the hook.

The method float rig itself is straightforward to set up. Use 6lb mainline, waggler float, a 4lb fluorocarbon hook length, one SSG shot, and a size ten hook.

If you ensure the line is tight when fishing, you will observe bites when the float lifts out of the water as a tench takes the bait. Also look out for 'fizzing.'

Another popular method is to use a dotted down 3AAA float correctly shotted and set about 4 inches over depth. The dotted down float can out-perform the lift method if there is a lot of tow on the water and you can anchor the float down.

Being prepared to experiment with hook baits can turn a challenging session into a good one. On some occasions, tench will feed aggressively, and you'll catch them on a size ten hook with double sweetcorn, bread or luncheon meat. Other times they will prefer a double red maggot, caster, or 6mm pellet on a size 16 hook.

This article was brought to you in association with Angling Times.