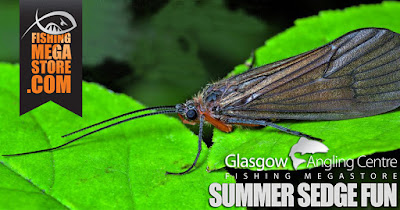 For many fly anglers at this time in the season, the evening gloom is eclipsed by the sound of hungry trout splashing - quite spectacularly in some case. The target? Sedges, skittering across the top of the water provoking aggressive takes from trout in hot pursuit.

The scientific name for the sedges is Trichoptera, which translates as 'hairy wings' and it's easy to see why. There are 198 species of Sedge in Britain including the great red Sedge, cinnamon sedge, grousewings and silverhorns, to name just a few.

From a fly fishing point of view, the evening sedge sport brings welcome relief during high summer. Anglers often don't even bother fishing until dusk arrives, because of the difficulty of daytime sport, especially on stillwaters, as the water warms and trout sulk due to lack of oxygen in the water.

However, come dusk, all hell breaks loose, and those anglers choosing to remain at home are missing out on some spectacular sport.

Sedges are at home on a river or lake, and it's one of the few times that poor fly presentation doesn't matter. A sedge creates a wake - or drag - across the water surface due to the fly line pulling against the current or the wind blowing your floating line. Trout see this as a sedge acting naturally, so be prepared for savage takes and proper hook-ups.

It's not just the adult sedges that concern anglers. The juicy nymph and pupae are well and truly on the menu too. After mating, females deposit eggs into the water and after hatching, the nymphs – often referred to as caddis – create a protective case (mobile or static) made from glued-together debris from the bed. Anglers call these the 'cased caddis' and have many imitations. It's just as well really because the fish love them.


Then there are the sedge pupae, which, before emerging into adulthood, betray their presence by bulging the water as they swim just sub-surface. Again, anglers have developed suitable patterns.

Fish the nymph or pupa with long or short draws on the fly-line as opposed to a continuous figure-of-eight. If you see a follow, stop the retrieve and then strike. The chances are that you'll find yourself hooked into a fish.  A positive lift of the rod is all you need.

But during summer it's the adults that interest fly anglers the most. Fish a floating line, long leader and a single fly. Sedges can be seen swarming close to the shore or in the sheltered side of boats. These are males trying to attract females. Occasionally, you'll see a pair break off from the swarm and disappear into a bush to mate. Then, you might see a female dipping her eggs into the water or crawling down a plant stem to deposit the eggs.

No season is complete without catching a trout on the Sedge. Armed with some knowledge about the Sedge's lifecycle, when they emerge, a basic understanding of how to fish the Sedge, and a handful of patterns, you will be surprised at how much fun you can have, and how explosive the takes can be.