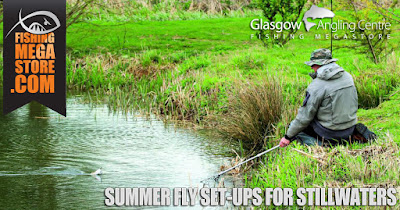 Stillwaters are truly 'on song' right now with insect hatches in full flow and the fish gorging themselves at every opportunity. But it's best to make the most of this situation before the summer heat warms the water and slows sport. Inevitably, when the temperature rises, it reduces oxygen levels in the water and fish become less active so having a few leader set-ups at your disposal will ensure that you can fish with maximum effect when conditions are favourable.

Therefore with a focus on mid-summer fly fishing, here are a few leader set-ups for large and small stillwaters for you to try, so make sure you have these patterns in your fly box!

Set-up 1: Kingfisher Damsel
At this time of the year, with climbing temperatures, abundant weed growth and long sunny days, damsels are out in force! Fishing this fly on its own in water from five to twelve feet deep would be an ideal choice. Use a long leader keeping the fly well away from the fly line (if possible, try to use 14 feet minimum). If you feel a single length of tippet is too much, then use a tapered leader to aid your turnover.

A short, sharp, pulled retrieve works best, letting the bead-head do its job helping the fly to duck and dive with each pull and pause. This fly is probably the number one 'go to' pattern on most stillwaters – ignore it at your peril.

Set-up: 2 UV Crunchers and Boobies
A team of three will often score highly on venues. You're giving the fish various choices, and often this can be more fruitful than the single fly approach.

This set-up – two UV Crunchers and a Booby (tequila) – tends to work best during early and late summer. The UV Crunchers are a great choice as the fish are locking onto pinfry. You'll often see them boil at the surface on overcast, warm days, a sure sign that they're on the pinfry!
As soon as the flies hit the water, rip the line back with two or three long, one-metre pulls to make the Booby work. It'll cause a major disturbance, and bring the preoccupied fish in for a look, where they'll often fall victim to the nymphs!
Set-up 3: Egg and Snake
Often when there is a bit of heat in the water, the fish may not want to chase, and in this instance, focus on fishing your flies on the drop. Two of the best are an Egg Fly and a Snake. Why are they so effective? They just look different!
Keep them spaced well apart (eight feet if you can), cast them out and let them fall through the water. You may need to keep tension on everything with a very slow figure-of-eight retrieve.
This set-up can be fished on a floating line if it's flat calm, and a sink-tip if there's any wind - you can just feel things a lot better this way.

You may feel plenty of knocks and taps, but don't do anything. Keep up the slow retrieve until the line locks up solid.

Set-up 4: Klinkhammer and Buzzer These flies can be fished to great eff ect in both flat calm and on waters with reeds and weed beds. Quite often when the water is calm with no ripple, repeated casting can ruin the swim. A better option is to cast only occasionally, and this set-up allows you to do just that. It's an ambush set-up but one that is often very good in these types of conditions.

As fish are cruising just below the surface, sipping at hatching midge pupae, fish the Buzzer only a couple of feet under the Klinkhammer fly. Make sure the Klink is buoyant enough to hold up the Buzzer.

This set-up can be fished static ( fish will take both dry and nymph) or you can twitch the line causing the Klink to bob under and back again – this method will take fish on the nymph!

Set-up 5: Shipman's and Midas
When it comes to fishing dry flies, a lot of anglers don't have a lot of confidence, however, they are essential patterns that do work so you must persevere. You just need to know what to do! Here are two proven fish-catchers that work well together on the same cast.

At this time of year, you want flies that will sit in the film not really on it – flies riding high come later on in the year. Fish the Shipman's on the dropper and the largest Midas on the point, it's a great method for targeting fish when it's overcast and there's a little bit of breeze on the water (the fish certainly love it).

You can fish this cast 'blind', with speculating casts or indeed to rising fish. However, don't expect splashy rises, fish taking these flies will be sipping them down, so make sure you are prepared!