Master the Art of Buzzer Fishing 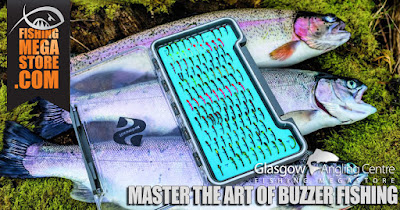 For all the little mysteries of fly fishing, there’s one that has prompted more questions down the years than any other. “How do I fish Buzzers?”

Fishing the humble Buzzer can be a leap of faith if all you know is pulling a Damsel or Cat’s Whisker. Suddenly, you’re going after trout with flies that are minuscule compared to the 'hulking brutes' that dominate your fly box. And they must be fished so much more slowly.

It is no wonder Buzzers often have to win the angler over before they start working their magic on trout. The key word is "confidence."  Once you understand the buzzer's lifecycle, and know how to adapt your leader rig appropriately, buzzer fishing becomes a pleasurable, and deadly, method for catching more fish.

What is a buzzer, exactly?
Its proper name is ‘chironomid’, which is a family of insects with more than 400 different species. They have an aquatic larval and pupal stage in their lives: the former represented by bloodworm, the latter emerging from the larval skin to ascend to the water’s surface, where it hatches as an ‘emerger,' from which the adult flying form materialises.

When swimming to the surface, there are often dozens of 'buzzers,' as they’ve become known, which makes for some excited fish. When they reach the surface, the buzzers try to break through the surface film in order to ‘emerge,' but the density of the film will often prevent them from breaking through.  So you will observe trout swimming around, busily picking off buzzers trapped in the surface film - which is exactly where we should try to present our flies.

So when should I fish Buzzers?
Buzzers are in the water all year round. You will see lakes with a layer of ice stretching several feet out from the bank, yet in the clear water in the middle, buzzers can be seen hatching and fish rising. Having said that, there are a lot of winter days when you won’t catch a thing with Buzzers.

In spring, through until the first frosts, you can usually rely on trout feeding on buzzers at some time during the day. If you can see rising fish and little buzzing midges flying around, then buzzer fishing will be a viable bet. Don’t ignore such simple tell-tale signs.

A good tactic, if you have company, is for both of you to start with an intermediate line, pulling a lure and marrow-spoon the first fish caught to see what it has eaten. Often the predominant insect is buzzer and that’s a good enough sign!

Another way of establishing how high on the menu buzzers might be at a given time is to check the margins for empty buzzer ‘shucks’ – the casing from which the pupa emerges before completing its journey to the surface, where the transformation into the winged adult occurs. Also look at any nearby spider webs for clues as to what's flying about.

Warm early mornings and evenings are when fish rise in earnest to the insects but watch out for the prevalence of other insects, which may result in what’s known as a ‘masking hatch.' This is when fish appear to be feeding on one thing but are actually focused on something else. So even if the conditions say ‘Buzzer,' don’t rule out trying something else if that slim pattern you’ve presented perfectly just beneath the surface is finding no takers.

Should I fish a floating line?
More often than not, a floating line will be all you need, because in the warmer months the cloud of buzzers will be quite high in the water. But that cloud will rise and fall through the depths, so put a Beadhead Buzzer on the point to see which one of your flies will catch. If fish come to the Beadhead Buzzer, then they’re likely to be mid water, so a sink-tip line might work. A short sink-tip line is often known as a ‘buzzer-tip’ line.


How long should my leader be?
How long a leader can you manage? If the wind is helping rather than hindering you, allowing your leader to land straight, then you might be able to fish an 18-foot leader with three flies. But if you’re on a small fishery and the wind direction is variable, then leader length should be whatever is manageable. If possible, try for 14 to 15 feet with a point fly and a dropper off a leader ring, four or five feet from the point fly. This is a good general-purpose leader length, especially when Buzzer fishing on a small water.

What retrieve should I use?
A slow one. If lures are all you know, then breaking old habits and slamming the brakes on your customary retrieve may be your biggest challenge. Keep reminding yourself that small insects like buzzers do not swim very fast. In fact, no retrieve at all – your Buzzers simply taking fish ‘on the drop’ (as they fall through the water) – is often a prime tactic.

If you do employ a retrieve, then its speed determines how deep your Buzzers fish. A Buzzer tied with a UV coating or two, or three coats of something like Veniard’s Brush Coat, will sink fairly quickly. So let them free-fall.

When you retrieve with a ‘figure of eight’ with pauses, the flies will rise and fall in the water, but a continuous retrieve brings the flies quite close to the surface. So like a lot of fishing, the most important thing is to find the fish, then slowly retrieve and pause until, in your judgement, the flies are presented at the same level as the fish.

Should I use a strike indicator?
There are a lot of good anglers who consistently use a strike indicator when fishing Buzzers. Sometimes, a fish’s take of a Buzzer is so subtle that by the time the sensation reaches your fingers, it’s too late. There is a lingering stigma attached to indicator fishing, but if you’re just starting with Buzzers, don’t be frightened to use a strike indicator until you’ve caught a few fish and have grown some confidence in your ability to ‘feel’ the fish yourself.

What colour Buzzers?
In winter, black is good and remains so even as the season warms up. Depending on where you live, though, there’ll be regional variations, from green through light reddish-brown, to shades of grey during the summer, which confirms the importance of spooning the first few fish that you catch. Size is also a factor. During colder months, buzzers will be smaller and darker, whereas in mid-season some buzzers can be three quarters of an inch long.

What tackle for Buzzer fishing?
When fish are avidly feeding on buzzers it’s possible to catch quite successfully on a 10ft, 8wt rod, but this weight of outfit does not give the delicacy of feel and the sheer joy of something like a 9ft 6wt rod. Then when the summer comes and it becomes a choice between dry fly, nymph and Buzzer fishing, a 9ft 5wt rod is fantastic.

Don’t strive for distance. Buzzer fishing requires the ability to put out a straight line at a reasonable distance, so that you’re fishing from the moment you see the flies splash down. A lighter fly rod allows the use of lighter leader: fluorocarbon of 4-6lb is a popular choice.

So if you have never tried buzzer fishing, you are missing out big time. Granted, it is a counterintuitive to think that a size 14 or 16 'skinny' fly that looks as if there is hardly any material tied on would garner any interest, but you'd be wrong.  If you have got the right colour, size and fishing at the right depth, you are in for a big surprise!