Posted by Fishingmegastore on April 12, 2019 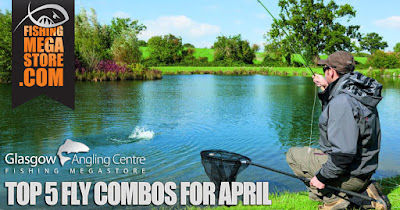 April can be a month of distinct differences. One week you get settled, warm weather with the temperatures in the mid-teens, the next it’s high winds, rain and the temperatures back into single figures. From an angling perspective, this can make things challenging, and the weather conditions will undoubtedly dictate the methods and patterns to use.

If there have been moderate-to-high winds, rain and low temperatures, then the chances are there will be minimal, if any, flies hatching. The fish will be lethargic and will be reluctant to chase lures fished mid-water. There’s also a very good chance (especially if water levels are low at some reservoirs) that the water has coloured up and visibility is between four and eight feet.

In these circumstances, a lot of competition fly anglers always opt for a lure-based approach when fishing from the bank or boat. Suitable patterns include those that create a large silhouette, movement and cause a disturbance to induce the take. The fish will not be wary of flies as the conditions, and water clarity will mask any errors in presentation.

Below are 5 fly combos for April to try which have proven very effective when fishing reservoirs and stillwaters.

Set-Up 1 - Single Booby Snake
The absolute banker of a fly is a Mini Black & Green Booby Snake - especially when fished as a single fly on a six to eight-foot leader of 8 or 10lb fluorocarbon on a Di-5 or Di-7 line. It has everything and will attract both residents and stocked fish. By using a single fly, presentation is not compromised, you are also creating competition for a single food source so takes are often harder and unmissable. 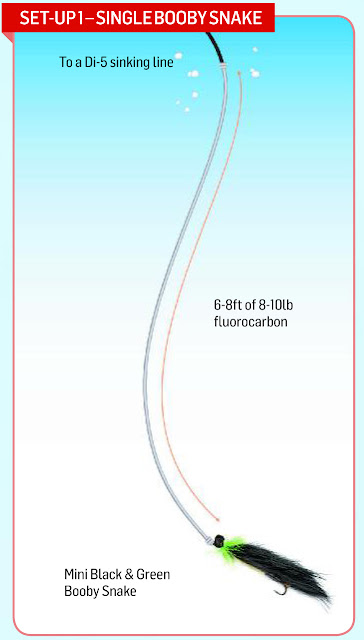 Set-Up 2 - Single Weighted Snake
If Boobies aren’t your thing, then given the conditions, you still need to present your fly in the bottom third of the water column to be successful. A weighted fly such as a Mini Black & Green Snake again fished as a single fly on a 12 to 14-foot leader on a mini-tip or intermediate line from the bank (or a Di-3 or Di-5 from the boat) is very effective.
After the initial cast is made, count the fly down anywhere from 15 to 45 seconds before commencing your retrieve.  Use a steady figure-of-eight (to hold the fly deep) with the odd 12-inch sharp pull to induce any following fish into the take. 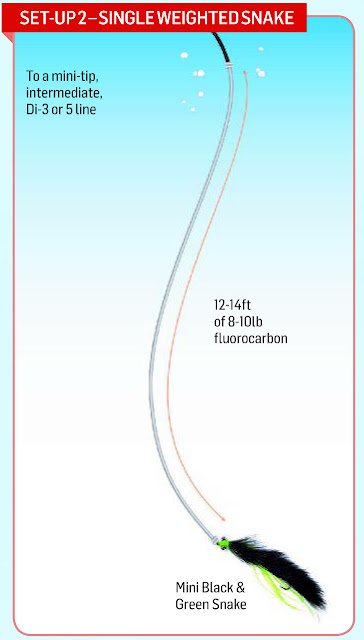 Set-Up 3 - Snake and Dropper
A slight variation would be to fish a 14-foot leader of 8lb fluorocarbon with a single dropper at nine foot (so the dropper fly also fishes at least in the bottom half of the water). On the dropper, use a natural unweighted pattern such as a Mckay, Damsel or Cormorant while keeping the larger Snake on the point. This set-up will allow you to fish two different layers of water, increasing your chances of success. 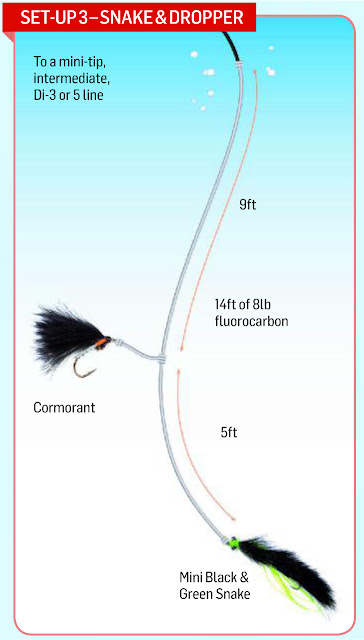 Natural Approach
If you are fortunate enough to get a period of settled weather, light winds and warm temperatures then you can change your approach dramatically. The water should hopefully not be coloured and churned up, instead, it may be ‘gin clear’. If this is the case, then a more natural approach will work well, especially if the fish have received a lot of angling pressure. Often the fish will follow the larger lures in clear water tending to not commit to the take and shy away at the last minute.

Set-Up 4 - Damsel & Cormorant
A floating or a mini-tip line with a 13 to a 15-foot leader of 6 to 8lb with a single dropper at nine foot will often be the ‘go to’ set-up from the bank, with a Red Holographic Cruncher or Black Two-tone Buzzer on the dropper and a Goldhead Bloodworm or Goldhead Damsel on the point. After the initial cast is made, again, wait 15 to 45 seconds to let the cast settle and the flies achieve their required depth.

A slow figure-of-eight will then be all that’s needed to put some fish in the bag. Often this method will result in an over-wintered fish or two. The thinner fluorocarbon is essential in difficult conditions, even at the start of the season. 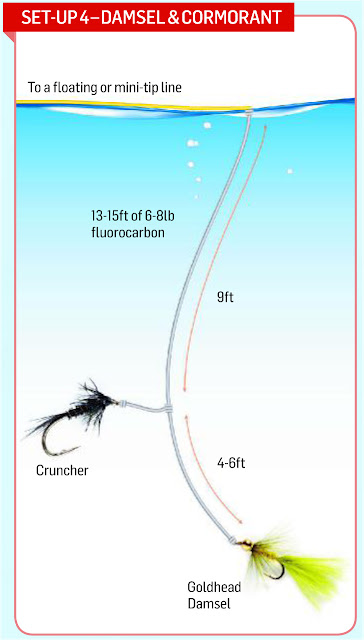 Set-Up 5 - Blobs & Cormorant
Again a slight variation (if the fish have not received too much angling pressure) would be to fish a weighted Mini Blob (Ham & Cheese or Sunburst) on the point. In clear water with light winds, the smaller Blobs produce better takes and ultimately more fish. 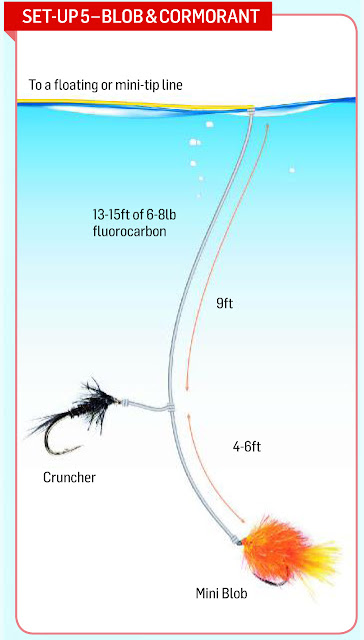 The above patterns and set-ups will always work provided you get the depth right. They have been tried and tested on the competition scene and elite anglers have complete confidence in them. Obviously each reservoir and stillwater is different in terms of depth, size, fly life, and the amount of fishing pressure applied.  Therefore, experiment with your own 'go-to' patterns in combination with the recommended patterns above. When things are slow, rather than start changing and trying different things, simply move and cover different areas of water.  Just because you have not caught anything doesn't mean the fish are not interested in your flies.  You might be in the wrong area because at this time of year, the fish will not come to you so you must find them. It is also advisable to have your droppers between eight and 10 inches long, and you will only ever need to change fly once or twice per day.

This article was brought to you in association with Trout Fisherman magazine.