Posted by Fishingmegastore on February 26, 2019 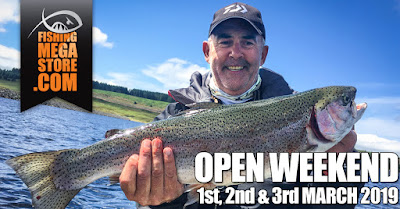 World record caster, Welsh internationalist, TV presenter and now Daiwa consultant, Hywel is a well known face in the angling community and will be in store on the 1st, 2nd and 3rd of the March 2019 Open Weekend to give tips and advice on all types of fly fishing and casting problems as well as demonstrating the latest casting techniques.

Hywel first wet a line when he was two and a half years of age and spent his years fishing the Rivers Teifi and Ystwyth for wild brown trout and sea trout. Since then he has fished extensively throughout the UK, Europe, Australia and in the USA.

As his skills developed, Hywel started competing in casting competitions, starting with local country fairs, then progressed to the CLA Game Fair where for three successive years he won every event. As a result he was asked not to compete any more so that others could have a chance of winning - and all this before he was sixteen years old! He then turned to the British Casting Association and started to compete at British, European and World casting championships. During this time he amassed the following titles:


Having been successful in the casting scene, Hywel decided to return to fishing. He has represented Wales on twelve occasions (and has been captain for his country three times). Six times were at home internationals, where he was Top Rod on three occasions. The other six were at World Championships, where he captained the Welsh team to a silver medal in Ireland in 1995 and was a member of the silver medal winning team at England 2000. Individually he has been one of the most successful competitors from all the home countries, gaining results in silver, 4th, 7th and 10th places.

So if you want to know anything about casting or fly fishing, come and meet Hywel at the Open Weekend. With FREE parking and FREE entry, there will be loads of things to see and do as well as some amazing bargains on all types of fishing tackle. Keep an eye out on Facebook, Twitter and instore for more info on what's going on at this event! Plus don't forget to register for your FREE GIFT ... Click here for details!