Posted by Fishingmegastore on February 09, 2019 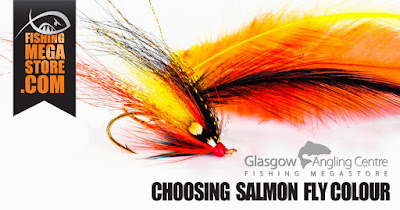 When it comes to salmon flies, the choice is endless. You have to navigate a plethora of patterns, shapes and sizes. But what about colour? In fact, how important is it to fish the 'right' colour of fly? Do you choose a fly according to the colour of the water? And what are the most effective colours?

Colour is important, however, when we start making rules like what colour of fly to fish when and where, the salmon have a habit of proving the opposite. Indeed, there can be few sports that throw up as many exceptions to the rules as salmon.
That aside, most salmon fishers accept the theory that we should fish a bright fly when the water is coloured and a more sombre pattern when the water is clear.  So, in coloured water, we might choose a fly with a yellow and orange wing over a gold body. Later, when the water is clearing - but not yet absolutely clear - or on rivers that are naturally peat-stained such as the Spey, we might tone this down with the addition of some black. For example, Willie Gunn’s hair wing is a blend of black, yellow and orange over a gold-ribbed black body. And later still, in clear water we might choose an all-black fly or a black fly with a dash of yellow such as the Tosh or Dee Monkey.

The above are broad generalisations to point you in roughly the right direction. But nothing is written in stone. It is often confusing how gillie's beliefs about fly choice differ. For example, you could be fishing a beat on the Findhorn where the ghillie is absolutely determined that a Yellow Ally’s Shrimp is far more effective in clear water than the standard orange version – which is only used when the water is coloured. But a couple of days later you could be fishing the Tay where the colour of the water is practically identical, and the gillie might tell you the complete opposite. Also, for the Findhorn, a few strands of flash in the tail could be the most effective style, while the Tay gillie might suggest snipping those flashy tail strands off with scissors!
In a similar vein, in fairly recent times the Cascade has become one of our most popular flies. But a few successful salmon anglers won’t fish it unless it has a fluorescent green butt (making it an Aurora Cascade) and jungle cock cheeks of just the right size. Because there is a belief that these additions take a good fly and make it great. And of course, because these anglers rarely fish anything else, it may be a long time before they change their minds.
So yes, it is confusing when we talk about fly colour. Each river is different; beliefs about what patterns and colours work best differ, water colour fluctuates, and air pressure goes up and down like the water level itself. However, what we do know is that the majority of salmon in the UK are caught with patterns that are tied with black, yellow and/or orange materials, but the choice is yours.