Posted by Fishingmegastore on January 04, 2019 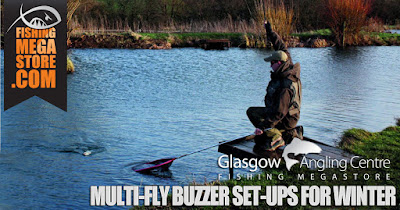 In winter, many trout fly anglers will automatically reach for lure patterns because there may be evidence of very little insect life, but because there are no hatches, doesn't mean there are no insects in the water. Using two or more flies at a time on the same leader is probably the most common style of presentation for stillwaters, and is deservedly popular. If you look at the options for two-fly rigs, particularly buzzers, it becomes clear that there are some fascinating techniques at your disposal which can be very successful in winter.
There are several reasons why the two fly set-up is preferable to fishing with one fly. For starters, you are giving the fish a choice, but it’s more interesting than that. Fishing two nymphs will enable you to try different colours and sizes of the same fly. Most stillwaters have a buzzer hatch at some stage in the day, but with around 300 species it’s hard to make the right choice. Having the faith to fish buzzers is a big hurdle for many, but this is the most important imitation you can use and worth persevering.

To fish buzzers during winter, use a floating line with at least a 12ft leader and size 10 Red Buzzer/Bloodworm on the point while 4ft away will be the dropper – a size 12 Black Buzzer. There are lots of variables, and if it’s a catch and release fishery, it's recommended to drop the hook size and fish with as fine a leader as possible. Then there’s the correct depth to consider. It can be hard to work out the depth the fish might be, so hedge your bets by putting a heavier buzzer on point with a lighter pattern on the dropper such that the fly sinks faster and therefore fishes at greater depth. But, if your point fly has a bulky dressing, it will sink slower than one which is almost a bare hook. In this case, you can add weight by using some lead or a bead that will speed up the sink rate.

Choice of sink rate for the point fly will depend on the water depth. There’s no point dragging through mud or weed in the shallows so you may need to change flies if the water is shallow.

Fortunately,when trying to establish the correct sink rate, there are some great ‘buzzer’ patterns which work in these circumstances. You can try the 'skinny' style buzzer pattern (maybe with weight) or, you can try a slim body buzzer but with a fluffy thorax to slow the sink. Then comes the Diawl Bach family and finally Crunchers, which with their tail and hackle is the slowest sinking ‘buzzers.'

That’s the buzzer family sorted, but you can also try other nymphs. For example, a weighted Gold Ribbed Hare’s Ear teamed with an almost non-existent Anorexic Buzzer suits fisheries not too rich in weed life but with freshwater shrimps. Pheasant Tail nymphs also lend themselves perfectly to this two-fly nymph approach and using a large (8 or 10) standard pheasant tail on point with a little (size 12) Sawyers-style nymph on the dropper, especially the flashback variant, can be very effective.
Retrieve Rate
The two-nymph system is best fished as slow as you can; indeed the buzzer set-up can be fished at a literal crawling speed. Keep the rod tip low and try to concentrate on the tip of the fly line. Any hesitation should be met with a firm lift of the rod. Don’t expect strong takes at this time of year – fish often don’t move much in the colder water.  Keep in contact with the flies and maintain some tension on the fly line by eliminating any slack.  You want to be able to lift the fly rod as soon as the line goes tight.

If you are not having much success with the floating line, 12ft leader, and a weighted point fly, don't go searching for the heavy lures just yet. Attach a sinking polyleader to your floating line and experiment with counting down the depths. Or, add a tungsten beaded nymph.  Alternatively, experiment with different fly lines such as an Di3 or Di4/5. Give the buzzers a chance because when they are the right size and colour, and fishing at the proper depth and speed, they can out-fish lure methods. Then, after you have exhausted all possibilities with the buzzers, it's maybe time to change your approach and look at fishing bigger, flashier, lure patterns.

This article was brought to you in association with Trout Fisherman magazine.