Posted by Fishingmegastore on January 08, 2019 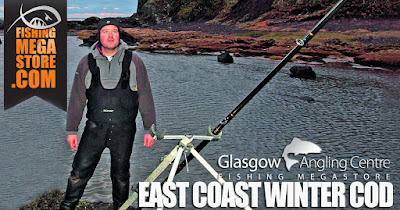 We are into the last phase of the cod fishing season. This happens after Christmas until the end of February, but it can roll on to early March. This phase occurs when the cod change their feeding patterns, switching from crabs to fish. It also coincides with some of the bigger fish coming inshore in search of food.

Tactics for fishing the east's rugged coastline are dependent on the conditions and the chosen mark. Often, the fish can be found under your feet, making distance casting less of an issue. You would be surprised just how close-in the fish will come.

Most sea anglers are fairly expert at using the variety of apps, online forecasts and webcams to monitor sea conditions. The colour of the water directly correlates to the weather and tides. Most successful sessions tend to come when the wind is, or has been, blowing from the east, which puts colour in the water. A chocolate coloured sea is the most popular and gives the angler the best chance of catching.

Tackle Choice
Powerful beach rods, and sea reels with enough capacity to carry a significant amount of sea fishing line with a decent amount of drag, will allow you to bully fish through underwater structure.

The breaking strain of the mono or braid chosen is perhaps the most essential part of your set-up. Most anglers avoid using a leader because it is a weak link that is unnecessary on the vast majority of the marks. If fishing mono, a minimum breaking strain of 40lb with a diameter of 0.50mm is strong enough because distance casting is unnecessary. It is becoming increasingly popular to fish a high-diameter braided line straight through. Fishing with braid certainly has its benefits, with improved bite detection and connectivity to the terminal tackle.
Rig choice is important because the ground will try its best to swallow up any rig that is not robust enough to cope with the demands of fishing into kelp and rocky structures.

You need 80-100lb snoods and rig bodies, with matching swivels and the all-important rotten-bottom link to have the best chance of retrieving gear, very often minus the lead weight. On some of the rougher marks, the best chance of getting your tackle back is with a fish attached.

Most anglers opt for a larger hook size that features a wide gape, and keeping its point showing when using large baits can often be the difference between success and failure.

How rough the mark is will be a deciding factor between a single hook or Pennel rig. Experienced anglers opt for a two-hook Pennel with the top one purely to assist with bait presentation. A Sakuma 5443 Pennel Manta Extra Hook attached to a pulley or fixed paternoster should suffice.

To reduce tackle loss, many anglers adopt a ‘less is more’ philosophy when rig tying by using line loops rather than swivels, and even pins and foam to replace rotten bottoms.

Bait choice depends on the time of year. Before December it can be hard going if you do not have access to peeler crabs, crab cart or cart wings. From December through to February, most fish baits (mackerel, Bluey and squid) will interest the cod. Many anglers also opt for cocktails that include other baits such as mussels, razorfish and frozen black lug.

Top Marks to Try
Marks along the East coast of Scotland between the Tay and Aberdeen fall into a number of categories – cliffs, rocky skeers, shallow reefs and, on occasion, clean sand – each will produce fish when the conditions are good. For example, the Arbroath cliffs can be a big draw for cod anglers when the fish are present and conditions are good. The area gives access to deeper water from the relative safety of a series of ledges and stances. While the cliff marks seem to be one of the most popular areas, they can be dangerous in big seas.

Victoria Park, the area at the start of the cliffs in Arbroath, gives anglers some rough ground and gullies to target. While not the most demanding of areas to fish, it can be very slippery underfoot and not a place to fish without studded waders.

For the visiting angler with mobility issues or disability, the cages at Arbroath harbour can be very productive and require very little effort to wet a line. The cages (above) are a series of box railings positioned along the harbour wall giving access to a large reef. They are generally fished over the flooding tide when a good sea is running. Each year, a number of double-figure fish are taken from here, undoubtedly with a few being lost when hand-lining them up the harbour wall. Often in high demand, they become crowded when the conditions are good.

Safety should be your priority when fishing in the North Sea because it can build very quickly, and rogue waves appear from nowhere. The tidal surge can be very quick, meaning you should always err on the side of caution when retreating from a stance. It is always advisable to avoid fishing on your own, especially on some of the rock marks north of Arbroath.

A spare headtorch, a charged mobile phone, knowledge of the UK tides, an accurate weather forecast and a life jacket or flotation suit are essential for anyone wishing to fish the area safely.

This article was brought to you in association with sea angler magazine.