Posted by Fishingmegastore on October 23, 2018 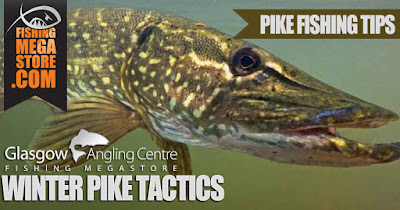 With the trees losing their leaves and temperatures dropping, predator anglers are prepping their pike fishing tackle in anticipation of some fantastic pike action. With razor sharp teeth, mottled camouflage, and lightning fast acceleration, pike sound more like something from Jurassic Park than a modern species of coarse fish. Sport from other species starts to slow down from November onwards, however, this freshwater predator can provide brilliant sport throughout the colder months. So in association with Improve Your Coarse Fishing Magazine, here are the simplest tactics that will reward you with plenty of bites.

Find the Prey Fish
Pike can live in any type of water from a weedy farm pond to a massive tidal river. The key to locating them is to find the prey fish – pike will never be far away. On canals, silver fish will begin to shoal up in certain stretches so start by targeting obvious holding areas such as boatyards, marinas, bridges, and ‘dead’ arms. The same rules apply on rivers. Find silver fish hotspots such as tributaries or any junction point between a main river and a tributary. Also look for slack water where pike can rest up out of the current waiting for prey fish to swim by.


Fish Multiple Swims
If there are pike in your swim, you’ll get bites fairly quickly. If you haven’t had any action after an hour, move pegs, even if it’s only 100 yards along the bank. At this time of year, pike will still be found in shallow areas such as bays and close to dying weedbeds. As the temperatures continue to drop, they will start to head to deeper water. To make moving swims easier, carry only the essential items. One pike rod, a landing net, an unhooking mat and a rucksack carrying your end tackle and unhooking tools including short and long-handled forceps is all you need.

Make Sure You Carry The Right Tools
Good quality forceps and Long nose pliers are essential.  This will allow you to remove hooks and lures safely.  Pike are more sensitive than you would imagine, so make sure you know how to handle a them properly

Pop Up Your Deadbaits
There is still likely to be plenty of blanket weed on the bottom which has yet to die off. Pike will use this as cover to ambush prey so fishing in or near the weed is an excellent place to target.

To prevent your bait becoming masked by the weed, you will need to add buoyancy so that it sits above the detritus. You can use either a naturally buoyant deadbait such as pollen, or you can make baits such as sardine or mackerel waft above the lakebed using a pop-up trace. If you are using a big bait, two bait poppers might be required. Test your bait in the margins before casting to check how it sits.

How To Safely Unhook a Pike
Pike are incredibly fragile and must be handled properly on the bank. Failure to do so can result in both you and the fish coming to harm. Always carry a selection of forceps and the use of semi-barbless trebles will make the job much easier. These only have a barb on one of the three hook points which is placed in the deadbait to secure it. If you are unsure, try and fish with an experienced pike angler until you feel confident.

Step 1 Place the pike on a padded unhooking mat. Make sure its fins are flush to its body and gently sit astride it to prevent it thrashing about

Step 2 Run your fingers into the underside of its jaws avoiding the gills. Apply light pressure with your thumb to secure a firm hold

Step 3 Lift the jaws gently upwards towards you and the pike’s mouth will open. You can now carefully remove the trebles with forceps.


Always Carry Some Lures Sometimes pike are only interested in moving baits. For this reason it is always worth carrying a small selection of hard lures and soft lures. A simple copper spoon is one lure every pike angler should have. They can be cast long distances and, once sunk to the bottom, they can be twitched and reeled in at various speeds. The other advantage of spoons is that they don’t cost a fortune.

Add Flavour in Coloured Water
If your chosen venue is still carrying a tinge of colour, boosting your bait with flavours or colour will help to draw pike to your bait. The simplest way to boost your bait is to inject it with bait oil. Look for winterised oils which are thinner and will release attraction in the coldest of conditions. When it comes to colours, red is one of the best. Simply brush on red food dye, or use liquid predator plus additive prior to casting.


How to Hook A Deadbait Place the first (below) treble into the root of the deadbait’s tail. This provides a firm hold. 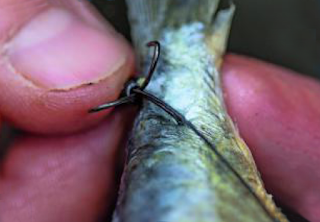 Extend the trace to its full length, and then put the second treble in the flank of the fish 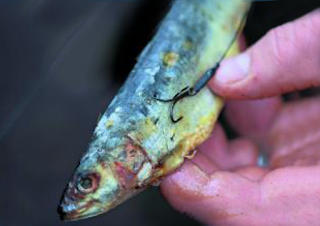 Twitch Before Reeling In When it comes to reeling in, instead of retrieving your deadbait all the way, pick up the rod, strike softly and wind a couple of turns on the pike reel before putting the rod back in the rod rest. This burst of activity will often entice a take.

Use Resistance Rings Pike will quickly drop a bait if they pick it up and feel something is awry. Setups that produce minimum resistance will therefore result in more positive bites. A pike float rig is hard to beat when fishing at distances of less than 50 yards. To fish at longer range you will need a straight leger presentation. Running rigs with a minimum lead of 2oz and a large bore ring will provide excellent bite indication whether a hooked fish swims towards you or away from the bank.

Strike Quickly
Set your float no more than 12in overdepth and strike firmly as soon as the float moves away. If the float is bobbing about and not moving away, it’s likely a pike is sat on the spot engulfing the bait. Tighten up to the rig gently and if you can feel movement at the other end, strike firmly. When legering, use a standard bite alarm at the front and a drop-off indicator at the rear.

If you fancy giving pike fishing a try for the first time or simply need to upgrade your kit, check out the awesome products available instore at Glasgow Angling Centre, or online at fishingmegastore.