When To Strike When Fly Fishing

Posted by Fishingmegastore on August 15, 2018 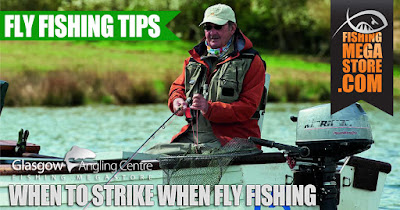 The sight of a fish taking your dry fly is what fly fishing is all about. However, there are days when you seem to hook everything and others, feel the hook point has disappeared. Success depends on the strike.

The term “strike” suggests a movement that is too vicious for hooking a rising trout, yet there are times when it is possible to react with a strike. For example, when too much slack has formed in your fly line as you scan the surface for a rising fish. For most rise forms, try to think that you are simply lifting into a fish that has your fly in its mouth.

For beginners, it is hard to reign in your instincts.  Consistently hooking fish depends on being able to identify the various rise forms, and by recognising their characteristics, you will be able to react with a controlled, methodical lift of the fly rod and floating fly line.
A splash at the fly
This usually happens when the fish is not totally convinced that your fly is what it thought it was, especially if it has risen from the depths.

With the splash, the automatic response to “strike” is only natural but successful hooking is down to chance. If you do not hook the fish, immediately lifting off and re-casting to the same spot can sometimes result in a more confident and often unmissable take. On the other hand, the fish may have shot straight back down to the depths again. In this instance, try a smaller version of the same fly pattern and hopefully, the fish will take it with more confidence.

Of course, it may have been the size of the fly that brought up the fish in the first place – a splashy rise is often to a large Daddy Long-Legs or Sedge. If you are consistently lifting into nothing, pause for a few seconds, then figure-of-eight or take one long pull away from the rise. Trout often try to drown these big flies before turning around and mopping them up beneath the surface. It isn't uncommon to hook a feeding fish in the tail as it slaps down on your dry fly - particularly sedges.

The head-and-tail rise
If you are fully concentrating, you should not miss this fish. It has been totally fooled by your offering and a simple lift, rather than a strike, should set the hook. Your immediate thought process should be, “Yes, that’s mine”, and then lift into it.

The Sip
Again, the trout has taken your fly with confidence. These are often better fish that have learned to feed with minimum effort. Unfortunately, these are the rise forms where hooking success varies most. The most successful tactic is to think, “That was to me,” then gently feel for the fish with a draw of the line or slow lift of the rod.

If the line shows signs of tightening, continue the lift to set the hook fully. If the fish has missed the fly or the sip was so gentle that your lift has drawn the fly out of its mouth, the draw away often results in a faster second rise – usually leading to a hooking. The smaller the fly, the more time you need to leave before lifting. A small hook simply needs longer to find a hook-hold.

So as highlighted, by recognising and understanding the various rise forms, you can react appropriately instead of 'striking' out of pure impulsivity. A methodical, controlled strike is what you are looking for, and with practice, it will result in more hook-ups. However, the key is to always be in contact with your flies!