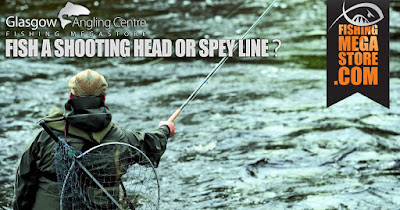 Being able to read the conditions and choosing the right size Salmon fly can make or break your day. It's also important to use the right Salmon Fly Line for the circumstances at hand. However, with the increased popularity of shooting-head fly-lines in recent times, confusion still prevails about what line to use. Do you stick with a Spey Line or should you opt for a shooting head?

Shooting heads are more comfortable to cast than longer spey lines, and make life easier when dealing with sink-tips and heavy flies, but what about from a fishing perspective? What are the advantages and disadvantages of fishing with one over the other? To answer that question you have to look at the influence of the river on both thick and thin lines, particularly how you want the fly to work in the water.

A thicker line will be more susceptible to the force of the current than a thin line because there is more of it for the river to carry. In a smooth flow where the river moves at the same speed all the way from near bank to far bank, a fly fished on a "longer" spey line will swing faster and come round on to the dangle sooner than one fished on a shooting head. This is because the river can exert more force on the full length of the spey line than it can on the relatively short shooting head, which is attached to a thin running line.

In contrast, if you are fishing a river with an even flow (see image above) it is recommended that you choose a spey line for late-spring and summer when the water is warmer. This is because the fish are more active and you really want your fly to move at a reasonable speed. In colder conditions, when you want to fish slower and deeper, it is better to use a shooting head. By keeping your rod tip high, you can hold the running line off the water and precisely control how and where the fly fishes. So if you are only carrying a spey line and conditions call a for slower swing speed, the best approach would be to use upstream mends to slow the fly.

In a river with an uneven flow (see image below), where the central main channel is moving fast, the slack water near the bank will cause a fly fished on a shooting head to stop swinging and sink. The solution to this problem is to strip line, which keeps the fly moving, something that you have to do anyway to re-cast. A spey line will keep the fly moving at a more consistent speed as it comes round into the slack water.

If you are fishing a river with an uneven flow, you can use a shooting head or spey line for late spring and summer. The fish should be lying in the faster, more oxygenated water and you will be able to present your fly to the Salmon with either line – however, the shooting head perhaps offers a little more control. In the colder conditions of early spring and autumn, when fish are likely to be holding in the slower water near the bank, the best approach would be to use a spey line so that you don’t have to strip the fly on every cast to keep it moving.
In the past, some of the great Salmon anglers used a double taper line. Double taper and spey lines are easier to mend than modern shooting heads and shorter spey lines. But ultimately, success is all about watercraft and correctly presenting the fly, or as well as you possibly can.

One of the key elements in Salmon fishing is the speed and angle that the fly is fished. Therefore, casting a progressively longer line at varying angles culminates in a long downstream cast. So by holding the rod tip high, it will slow down your small fly as it swung from side to side.

Fishing for Salmon is all about controlling the speed of the fly, so a shooting head provides an easier tool with which to produce the same result. Shooting heads are more effective in slowing the fly during the first third of the swing. However, there are occasions when deep wading and fishing the fly on a short line will produce results but a long line won't. So to re-emphasise, it is all about the speed and angle that the fly is fished in a particular part of the pool that matters.

Reading the pool and knowing where the fish are likely should be your central focus. Once you know that, it’s all about how to target them best with the tools you have. Some ghillies would argue that most salmon are caught between 15 and 25 yards from the angler. At these distances, you can fish the fly precisely the way you want. And if you can read the water, understand where the fish may be and know how to cover them, then all you have to do is be able to control your fly correctly.

In summary, the right line to use is the one that allows you to cover the water, and the fish, most effectively. Remember, the thicker the line, the more the force of the river will act on it. A shooting head will move faster but is more comfortable to control due to the thin running line. In contrast, a traditional spey line will move at a consistent speed and is easier to mend (which is particularly useful when wading) however it is more difficult to control the depth at which the fly swims.

If you are a beginner who has learned to cast with shooting-head lines, it is worth making the step up and learning to cast a spey line as it will give you more options as to how you fish a pool, particularly once the water warms in May and throughout the summer months.

For more information, or help with choosing the right Spey Line or Shooting Head, visit us instore at Glasgow Angling Centre, or if you are through in the East, Edinburgh Angling Centre.  Alternatively, if you would like more help and advice, you can call us on 0141 212 8880.