How to Quickly Unhook a Sea Fish

Posted by Unknown on May 16, 2018
Watching an experienced sea angler remove a hook from a fish and it looks so natural. It's all over in a split second. However, for many novices and even some experienced anglers, it can be a traumatic and challenging task, especially if the fish is hooked deeply.

The welfare of the fish is your first consideration, but because the majority of fish are small, many less than 1lb, and because standard are hooks fairly large at around size 2 to 2/0, there is a chance that the fish’s small mouth can be damaged unless we are careful.

If you are fishing for the pot, and lots of sea anglers still do, then damaging the fish isn't an issue because it has already been dispatched. However, if you want to return most of the smaller fish you catch, removing deeply embedded hooks is a skill you have got to master. Preventing fish taking hooks deeply is not an option. You can use bigger hooks, although when they contact a fish they may do more damage. The problem is compounded by the fact that most of the species we catch eat first, swallow second.

Striking early can help, but it is not a consistent solution and often the range we fish at, and the tackle used only registers a bite when a fish, in all probability, is already hooked. So, you can't get around the fact you have got to remove hooks efficiently.
Unhooking quickly is mostly about angles. You need to manoeuvre the hook so that you are pulling against the barb only. Anglers have significant problems because they pull against the hook bend. Practice will make you efficient, and if you struggle, get an experienced angler to show you the correct method.

Disgorgers, pliers and forceps can all be used to make the task more manageable and less harmful to the fish, but again there is a technique and skill to the process. A disgorger is not a shortcut to easy unhooking if you don't know how to use it!

Long-shanked hooks are easier to remove than short-shank hooks. Short shanks may present a bait better, but long-shanks are the easiest to remove, only because there is more of the shank to grab so you can twist, angle, bend or push to get it free.

Soft-wire hooks are another commonly used option, although these can straighten when pulled and a sharp barb can cut the fish internally. Micro barbed or even barbless hooks are other options.

A significant amount of stretch in monofilament line fished at long range can allow a barbless hook to fall out. However, fishing with barbless hooks is only practical at short range and for conservation sea fishing.

A compromise is to use a crushed barb. Simply squash the barb with a pair of pliers; this way you retain a fish holding bump at the hook point rather than a sharp barb.

Another alternative is to use much smaller hooks. Coarse anglers catch giant fish on tiny hooks and it is possible to do this at sea, providing your tackle is balanced, and your catch does not have to be lifted.

Sea match anglers are increasingly adopting hooks down to size 10 because of the increase in catch and release events, and these are far easier to remove without damaging the fish. Small hooks are also easier to remove with a freshwater-type disgorger. A freshwater disgorger is useful for removing smaller hooks from Flatfish.
Lots of sea anglers use their finger as a disgorger. Here you simply push your finger into the bend of the hook, push the hook and remove. Great for toothless fish, but not so easy with species like Whiting, which have dozens of tiny razor-like teeth.

Gemini makes one of the best disgorgers around. It is excellent for Dogfish, Whiting, and other species with small teeth that can make a mess of your fingers.  Using your right-hand, simply slide the eye of the disgorger on to the line and push it down to the hook bend. Pull the hook snood line tight with the left hand in the opposite direction and shake the fish and it should fall off the hook.

For boat fishing or bigger fish like Congers, Cod, and Ling, use a larger T-bar disgorger, which works on the same principle as the Gemini.

Returning fish after the hook has been removed is simply a matter of slipping them back in the water gently and as quickly as you can. There is a range of potential problems you can encounter, such as a long drop to the water when fishing from piers and cliffs, and while some species are more delicate than others, the size of the fish makes a big difference to its potential survival.

Placing a small fish in a bucket of water allowing it time to recover before returning it can also improve the survival rate.

At the point of release, shore-caught fish should be supported by two hands, one at the tail, one under the belly, and held facing into the oncoming surf. Hold the fish until it regains its strength, and it will indicate by moving its tail and flexing its body when it is ready to go.

When releasing fish from rocks, man-made structures, and boats into the deeper water, lower the fish as close to the water as you can, then drop them in head first. The vertical entry seems to help fish recover quicker. This technique also works from boats too.

Careless handling of fish is a primary cause of casualties. Many delicate species, like Pollack, Pout, and Cod, lose scales and slime and are prone to dropping when they wriggle. 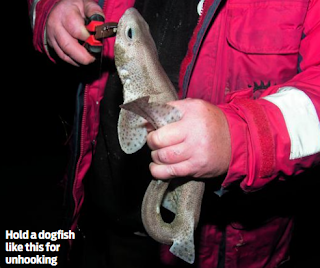 Wetting your hands before handling your fish is always reccomended, although many anglers consider it better not to handle small fish at all if possible. The slime coat in fish is composed of a mucoprotein that serves as the frontline barrier to keep essential fluids and electrolytes in the fish. Any break in the slime coat is akin to a cut or abrasion on our skin.

Anytime something brushes against the slime coat, it is disturbed. Handling, hooking, or even netting a fish, causes a significant disturbance of the slime coat. Biting or nipping by other fish, are another prime cause of damage.

There will always be brief distress to the fish when caught but by wetting your hands when handling you will help keep the protective coating intact as much as possible and this will make a big difference compared to using dry hands or gloves. Some species can be handled by the mouth which causes less damage to their flanks.

Hanging them from the hook snood is a better alternative than gripping the body. Dogfish, Smoothhounds, and Rays are more robust and can be handled causing them less harm, but you should be mindful of the rough skin and thorns.

There are several ways to preserve fish for the pot, especially when they are caught early in a session on a hot day. Gutting the fish prevents the flesh going soft quickly, as does keeping fish separate from one another. Lay them in a covered cool box, bag or fish box. Don't cram them in a plastic bag and then leave them in the sun.

If you would like more information regarding unhooking your fish visit us in store at either the Glasgow Angling Centre or the Edinburgh Angling Centre. Or call us on 0141 212 8880 and our expert staff will be happy to help.