How to Catch Conger

Posted by Unknown on April 25, 2018
The Conger Eel is one of several species of marine Eels found throughout the world. The genus includes some of the largest Eels found, and in the case of the European Conger Eel, some specimens can grow as large as 10ft long.

The Conger Eel is so distinctive. It is all but impossible to mistake it for any other species, the single exception being small ‘Strap Conger’ weighing a pound or two that might be wrongly identified by inexperienced anglers as being a large Silver Eel.

The average size of Conger Eel caught offshore is probably between 10-40lb, but each year many much larger fish are hooked, including a few weighing more than 100lb. The current British boat-caught record for Conger Eel is held with a fish that weighed 133lb 4oz, caught off Brixham, South Devon, in 1995.

Much larger fish have been caught commercially, with the largest ever recorded being a monster weighing 350lb taken in nets off the Westman Islands off the southern coast of Iceland. A 210lb Conger Eel was once landed at Falmouth, and fish of 170lb and 155lb have been landed at Newlyn and Plymouth respectively.

Congers are caught all around the coast of the British Isles, and most are targeted from the spring through until the autumn. The optimum time to catch them is during the high or low slack water period, and just as the tide starts to run. For this reason, the extended slack water periods
encountered on neap tides tend to be the most productive.


Due to the potential size and immense strength of Conger Eels, and the rough ground they inhabit, anglers specifically targeting big Conger Eels require heavy-duty tackle. Stiff beachcasters, big multiplier reels are the right equipment to hook a Conger Eel and bully them out of the snags and weed.

Your reel needs to be tough and large enough to accommodate your line. The line required will have to be on the heavier side, so use either heavy braid or mono. Some anglers prefer heavier mono as it has a much better abrasion resistance.

Your hook length should be either very heavy mono or a 6-8 inch length wire trace to the hook as a biting length.

By a long way Mackerel baits are the most commonly used to catch conger with Mackerel flappers, Mackerel heads, Mackerel fillets and full small Mackerel all proven to catch Conger. However, whole large Squid, Cuttlefish and Bluey can also catch big Eels, as these species are likely food sources which Conger Eels will come across in their natural environment.

The roughest and heaviest ground has the highest chance of being home to a Conger Eel, and tackle loss will inevitably be high. For this reason, anglers should incorporate some sort of 'rotten bottom' or 'weak link' release into the rigs they use. Knowing when to strike a Conger bite can be difficult as Conger can be surprisingly shy biters, so it is wise to give them time to take a bait entirely before striking and reeling in. However, if a Conger is given too long it may well make its way into a hole or manage to wedge itself into a crevice or crack. If this happens a decent-sized Conger will likely be impossible to budge.

Knowing when to strike and reel in a Conger Eel is a matter of judgement (and to a certain extent, luck). It's also wise to leave the reel on the ratchet so that a Conger taking and moving off with bait will take the line and give an audible warning. Using this method eliminates the risk of the rod being pulled into the sea – something a large Conger Eel is more than capable of doing.

Firmly set the hook by winding the line as tight as possible, and then lifting the rod. It is essential to force the fish away from any snags as soon as possible, as the instant an Eel feels the hook, it will attempt to swim rapidly back into the wreck or reef and will be lost.
Once you have bullied the fish into open-water, maintain as much pressure on it as you can, and start slowly working the fish up through the water column, which, be warned, is hard, physical work. 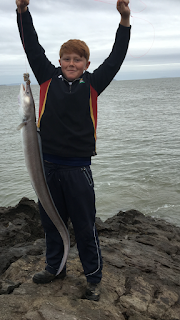 Before you set out in search for Conger, remember bites usually come very quickly, and it is essential that you get yourself sorted beforehand with a good firm standing platform. People don't understand what they are up against with a Conger and underestimate their incredible strength.

And if you are lucky enough to land your Conger, a disgorger or a good set of pliers is an essential piece of kit.

Catching a Conger is not for the faint of heart, but all the hard work could see you land a catch of a lifetime, and if you are unlucky, a hernia!

If you would like anymore information regarding Conger Eel visit us in store at either the Glasgow Angling Centre or the Edinburgh Angling Centre. Or call us on 0141 212 8880 and our expert staff will be happy to help.