Fishing For Pollack From A Boat

Posted by Fishingmegastore on August 23, 2017 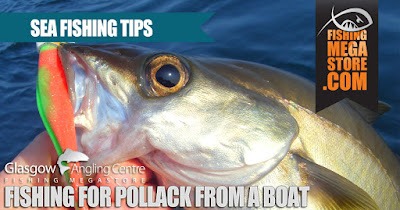 Pollack is common around the coast of the UK and Ireland, feeding mostly on small fish and sandeels, but they will also rummage on the seabed for worms and crustaceans. Occasionally confused with coalfish, the lower jaw of the pollack protrudes noticeably, and there is no barbel on the chin. The lateral line of a pollack (Pollachius pollachius) curves steeply upwards at the shoulder, and, being a member of the cod family, it has three dorsal fins. Its colour varies from one location to another, and ranges from brown to greenish-grey, to a golden, copper colour throughout the flanks.

Species
Pound for pound, pollack is one of the hardest fighting fish caught off the UK coastline, especially when taken on LRF tackle. Traditionally, pollack wasn't regarded as a food source, their white flesh lacks the flavour of similar species.  However, in recent years, thanks to the efforts of TV chefs, pollack has widely replaced cod and haddock. Not surprisingly, this has resulted in increased commercial fishing for the species.

Depending on location, the average size of pollack caught offshore is probably between 4-8lb, but in many areas, double- figure specimens are regularly caught, often on a daily basis. This is especially so during the first few months of the year when large aggregations of mature fish converge over offshore wrecks and reefs to spawn. At such times, it is possible to catch fish over 15lb.

Where And When
The vast majority of pollack are caught from reefs or wrecks, though fish are occasionally caught over relatively featureless ground. In some areas, such as the West Country, Ireland and Scotland, where deep-water reefs are located close to shore, pollack are caught in good numbers inshore, although fish in such areas will invariably weigh less than 10lb.

The largest specimens are almost always taken over wrecks or reefs located many miles offshore.

Boats fishing out of ports along the south coast of Devon and Cornwall have a long association with specimen pollack fishing over wrecks, along with other ports extending further east throughout the English Channel as far as Dover. Other pollack hotspots include wrecks located in the Celtic Deeps and St George’s Channel off West Wales, reefs around western and northern Scotland, and pretty much anywhere off the south and west coast of Ireland. Wrecks in the North Sea tend to be less productive in terms of the numbers and size of pollack they produce, but good fishing can be found here.

Tackle For Pollack Fishing
The traditional set-up for pollack fishing used to be a 12/20lb-class boat rod featuring a multiplier reel loaded with mono or braid.

Many anglers still use such gear, although, in recent years, advances in tackle manufacturing have produced excellent spinning rods and fixed-spool reels that have been specifically designed for fishing for various species of hard fighting sport fish throughout the tropics.

As a result, an increasing number of anglers are now using spinning outfits to fish for pollack, even in depths of water of several hundreds of feet over offshore wrecks. Not only are these fishing outfits more than up to the challenge of taking the largest pollack, but they deliver superb sport with these hard fighting fish.

Pollack Rig
The traditional rig for catching pollack from a boat is the flying collar or versions of it. This consists of either a long, wire French Boom or, more likely, a plastic tube boom sliding on the mainline or leader, followed by a small bead and terminating in a small, high-quality swivel.

The hooklength is tied to the other end of this swivel and is usually clear mono between 8-12ft in length. The hook, or more likely, lure is tied to the end of this. If using modern spinning tackle as described above, the weighted shad is tied directly to the end of the leader, dropped straight down to the bottom and wound back with a steady retrieve. If you are losing rigs in the wreck, it is possible to attach the weighted lead sinker with a weak link of line.

When fishing for pollack over reefs, some anglers still use strings of up to six feathers or their modern equivalents. These are fished with or without bait.
Baits For Pollack Fishing
Most anglers fish for pollack using lures. Typically, these will be one of the great many variations of artificial sandeel lures, such as the ever-popular 172mm Red Gill Eels. Shads have become very popular for catching pollack, especially the incredibly life-like range of Storm Wildeye Swim Shads in various sizes and colours.

The heavier versions for these are fished in deep water using modern spinning rods and lures and spinners, as described.

Pollack can also be caught on sea baits fished off a long flowing trace tied to the same rig as described for lures. Indeed, at times, a live sandeel or head-hooked king ragworm can out-fish anything else by a considerable margin.

Method
The general method used when fishing for pollack over a wreck or reef is to position the boat uptide of the area to be fished, and then slowly drift back over it. The angler drops his bait or lures down to the bottom, then slowly starts to retrieve it up through the water column.

This technique is particularly useful because the shoals of pollack are often located at various heights within the water column, and it is essential to determine at which height they are feeding. Counting the number of turns of the boat multiplier reel or fixed spool reel handle to the strike zone can help maximise results.
A delicate plucking usually detects bites and pulling at the tail of the lure, and it is essential that when you feel this, you maintain precisely the same rate of retrieve and resist the urge to strike. Keep winding, and eventually the fish will engulf the lure and dive to the bottom, at which point you set the hook by lifting the rod.