Posted by Fishingmegastore on April 17, 2017 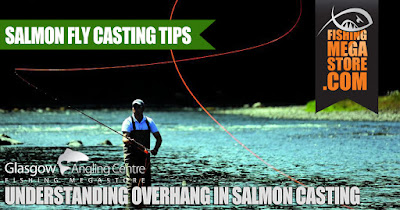 When it comes to the use of shooting heads and Skagit lines, a critical aspect of improving your water coverage is 'overhang,' the term used to describe the amount of thin running line outside the rod tip before your next cast.

Because there are different head lengths, salmon fly rod actions and casting abilities, there is no set length of overhang. But as a general indication, casting with 1ft of running line beyond the rod tip will offer excellent performance with a shooting or Skagit head.
What you should try to avoid is retrieving the head into the rod rings before your next cast. A shooting or Skagit head can have a thick belly with a short taper, and if the belly is retrieved through the rod tip, it will noticeably increase the contact friction on the rod rings during the outbound phase of the cast. This not only results in a reduction in forward line speed, it will also tend to open up the front profile of your unfolding loop. These two negative effects have the same outcome – a loss of casting distance!

At the opposite end of the spectrum, extending the amount of overhang much beyond 4ft will inhibit overall performance. Too much running line beyond the rod tip will struggle to turn over the main head, leader and fly adequately. This is because such a length of thin running line has insufficient weight and mass to turn over the thicker, heavier head. You’ll know when you are beyond the workable limit of overhang: the telling feedback will be a noticeable “bounce” from the rod as the forward cast is applied.

A helpful way to optimise the amount of overhang for your particular rod-and-line set-up is to start by casting the salmon fly line with the back of the head touching the tip ring of the rod. After a few casts, extend the overhang by a few inches and feel how the rod responds to the additional running line outside the rod tip. Continue the process until the rod starts to bounce in your hand. As mentioned earlier, this indicates the point where there is too much overhang, and the running line can’t turn over the weight of the head.
Now reverse the process and shorten the amount of overhang every few casts until you reach a point where the rod and line feel balanced, and the loop formation during the forward delivery feels smooth as the line unfolds in the air. At this point, you’re in the sweet spot for your particular rod-and-line set-up.

This amount of overhang will also have a slight hingeing effect, which has the positive impact of tightening your forward loop. This will also enhance water coverage.

To ensure you always return to the sweet spot, use a black indelible pen to mark the running line where the first finger of your uppermost hand touches the thin line.