Posted by Fishingmegastore on December 09, 2016 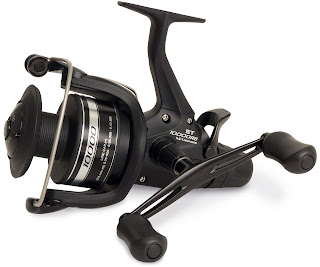 The Shimano Baitrunner ST RB is a serious bit of fishing tackle equipment - so what's all hype?  Well you need to go back to the first Shimano Baitrunner ST, which was undoubtedly one of the best selling baitrunners on the market.  It was reasonably priced and presented the angler with outstanding reliability and bang for buck. If you were ever in the market for a bait runner and didn't wan't to fork all your budget on a reel, the ST was a great first choice.

The newer Shimano Baitrunner ST RB serves the function that all Baitrunners are built for, namely to have a controlled free spool when fishing.  This is achieved with a secondary drag function which essentially means that if you are fishing with baits, you can allow the fish to take the bait, give the fish enough time to run with it, then get a good hook-up. 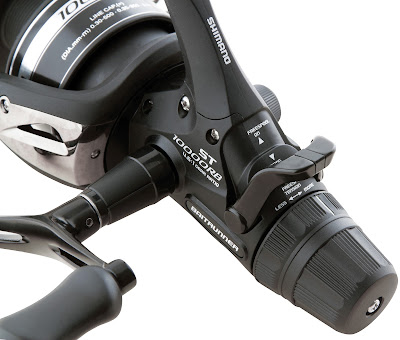 The lever at the back of the ST RB controls the Baitrunner feature.  The lever offers the ability of little or no tension without opening the reel's bail arm or changing your main drag setting. If you leave the  lever off, then the drag is engaged.  Conversely, when you flip the lever, the spool disengages from the drag which releases tension and the drag function switches to the drag controlled at the back of the reel.  This explains why a lot of reels include RB, FB etc, an abbreviation of 'Front Drag' or 'Rear Drag.'  The rear drag will only put a small amount of pressure on the spool and with minimal impact, the Baitrunner is able to control running fish efficiently.

Once the fish has taken the bait and run with it, you can either make a turn of the reel handle or flip the Baitrunner rear lever and engage the main drag allowing you to fight the fish normally.  So ultimately the positive benefit of a Baitrunner is the ability to allow the line to be let out, under very little tension, not free-spool, to allow the fish run until you set the hook.  The ST RB does this, and some!

The new Baitrunner ST RB replaces the best selling ST RA Shimano Baitrunners with a host of new improvements.  It features a Varispeed, AR-C line management system which essentially means good quality line lay.  This is extremely important for precise, long and accurate casting and in the new Baitrunners this is possible through two specifically designed gears, one oval and the other is square shaped.  These gears achieve consistent spool speed by altering the oscillation cam, therefore resulting in superior line lay on the spool and delivering excellent casting and overall manageability

The ST also has an XT-7 body and spool make-up which gives the reel additional strength and protection.  XT-7 is Shimano's new graphite which is 200% stronger than current graphite using Shimano's latest technology for improved rigidity and longevity.  Another great feature of the Baitrunner ST is the new 'Dyna Mode System' which eliminates wobble during retrieve by counter balancing the rotor to enhance sensitivity and smoothness.  This effect is similar in car wheel balancing where there is a re-distribution of weight to create a smoother rotation and greater elimination of vibration.

The ARC System in Baitrunners is particularly clever.  Through thousands of hours of casting tests and computer simulations, Shimano have been able to create a new spool lip design which provides longer casting distances than a standard spool lip design.  This also prevents backlashes and wind knots from forming.  The ARC System also allows line to flow off the spool in smaller loops during the cast which means less 'slap' on the stripper guide and longer casts with less friction.

Lastly, the oversized power roller is a special design feature from Shimano that reduces line twisting during retrieve and is a massive advantage when using thin lines such as monofilament and braid lines. The long term bail arm spring on the ST RB will give you years of reliable use and silky, ultra-smooth rear drag which also  gives you greater confidence in controlling the fish but giving you enough slack to enjoy the tussle. 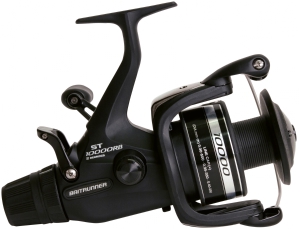 The Shimano Baitrunner ST RB comes in two models, the 6000 RB or the 10000 RB.  The 6000 RB weighs 550g, has a line capacity of 300 yards of 10lb line and a gear ratio of 4.6:1.  It's smaller than the 10000 RB so it's an excellent choice for the match or river angler who likes to fish feeder tactics for big specimens such Carp. So the target might be big but the 6000 RB gives you additional confidence and security when bites are aggressive.  The 6000 would also be suitable for Predator fishermen who fish with thicker diameter lines.

The 10000 RB is the big brother of the 6000.  It weighs 555g, has a line capacity of 430 yards of 12lb line and a gear ratio of 4.6:1.  The 10000 is your choice for the big stuff including bigger Pike, Carp or Zander and given it's Baitfeeder abilities, you can hook into fish with confidence.  Just imagine.  You are lying on your bedchair relaxing, watching the rods like a hawk.  Then, all of a sudden the bait alarm goes off but instead of picking the rod up and striking into he fish like an impatient kid waiting for Santa, you wait, you let the fish run a bit and let the Baitrunner lever do it's job.  You simply make a turn of the handle or flip the Baitrunner rear lever and engage the main drag allowing you to fight the fish normally.  Bingo, you're in! 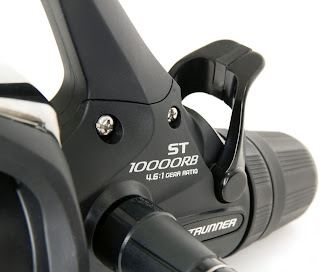 The ST RB is definitely punching above it's weight in terms of quality and price so if you are in the market for a Baitrunner, the ST RB 6000 or 10000 will do the job nicely.  Here's a reminder of what you'll get: