How To Fish Soft Plastic Lures For Pike

Posted by Fishingmegastore on November 22, 2016 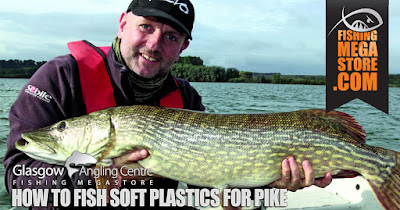 Lure fishing for both freshwater and saltwater predators is booming. It’s no longer unusual to see anglers fishing with dropshot gear along canals or LRF fanatics among holidaymakers at the seaside.

While all lure fishing is exciting, hunting pike with artificial baits has to be one of the best methods, just because it is a very efficient way of catching big fish from a variety of venues. On canals, fast flowing rivers, gravel pits or giant reservoirs, soft plastics will catch pike, and rather than play second fiddle to deadbaits, lures can often outscore the real thing.

As with all baits, everyone has their personal favourites, but when it comes to lures, soft plastics are up there. Not only are they cheap to buy, but also versatile - a real Swiss army knife of the lure world.

Most need rigging yourself, adding a weighted jig head and maybe a stinger hook rigged behind it to hook more fish. Rigging the lures yourself offers flexibility, as you can change the weight and the position of the hooks to suit the venue.
Most brands will also offer their best-selling lures ready-rigged, which is ideal if you are starting out and want a sure-fire bait that will work straight from the packet.

Lure Choice Made Easy
There are thousands of different lures on the market, so how do you know which ones are right for you? Fortunately, with soft plastics, you can easily and quickly narrow the choice down.

Size is the most important factor. Lures in the 5ins-7ins (12cm-18cm) range are easy to cast and will catch pike from a few pounds up to record-breakers.

Ninety percent of the soft lures used by some of the top pike anglers have a paddle tail that imparts plenty of action in the water. Other styles are for zander and perch.

One important factor to consider is the bigger the tail, the wilder the action, and usually the more the pike will like them!  A big spoon-shaped tail will also tend to make the body of the lure roll from side-to-side. This indeed doesn’t replicate the swimming action of a prey fish, but the pike does find it hard to resist. Paddle tails create massive amounts of vibration, which pike can sense using their lateral line from many metres away.
The other 10 per cent of soft lures are big grubs, with long curly tails that ripple enticingly on the retrieve. For some reason, these can be deadly when all else fails, but at other times can fail to interest the pike. This is because they create a different, more subtle, vibration.

What Weight of Jig Head Do you Add?
Grubs and shads can be quite heavy, but in water they are neutrally buoyant and need a weighted jig head to get them down to the right depth.

How To Rig Soft Plastics
If you are new to using soft plastic lures, Berkley, Fox Rage, and Savage Gear all offer them pre-rigged with a jig hook and stinger treble already fitted.
These are a great place to start, but soon you are likely to want to rig your own with different weights of jig head and perhaps different hook positions.  It can also work out cheaper to rig your own.

The Importance of Colour
When it comes to lure colour, there are differing opinions.  Some very successful pike anglers place little emphasis in lure colour. However, using different colours of the same pattern, there is plenty of evidence to suggest that it does make a significant difference, especially where the water is clear.

You have to be careful not to pick colours just because you like them. Pike perceive colour entirely differently to humans, and often it is the not-so-obvious patterns that can work best.

Greens and yellows are the main go-to colours for many top pike anglers. Everything from super-bright chartreuse to drab olive will catch pike, and this end of the spectrum attracts them. The brighter colours often produce the most fish, especially on venues that have not seen a lot of lure fishing. The nondescript dark greens have an uncanny knack of turning up the bigger fish and also work well in murky water, even at night.

A lot of top pike anglers achieve excellent success lure fishing before dawn, and it is the strong silhouette of a dark green lure that produces the goods time after time.

This article was brought to you in association with Angling Times.