Posted by Fishingmegastore on August 24, 2016 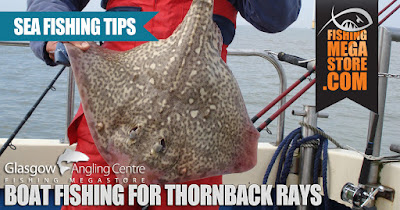 The thornback ray, also occasionally called a thornback skate, is one of the most common members of the Rajidae (skate) family. It is found throughout the coastal waters of Europe, as well as the Atlantic coast of Africa, and possibly as far south as the shores of Namibia.

The body is kite-shaped with a long, thorny tail. Its back is covered in numerous thorny spines, as is the underside in older females. In sexually mature fish, some of the spines are thickened with button-like bases, which are known as bucklers. These are particularly well developed in the tails and backs of sexually mature females.

Colour varies widely depending on location, but typically ranges from light brown to grey, with darker blotches and numerous small darker spots and yellow patches. The diet of the thornback ray, which lives on mud, sand and gravel seabeds, consists of small crustaceans, bottom-living shrimps, crabs and small fish.

About the Species
The thornback ray is a favourite target species for boat anglers, not least because in many areas it is relatively easy to catch. In the east and south-east of the country, thornbacks (Raja clavata) are widely referred to as 'Roker,' and are an especially popular species because their wings make good eating.

As with most of the various other species of ray caught around the British Isles, 'thornies' have a decent average size, probably between 6-12lb, and are therefore guaranteed to put a healthy bend in your boat rod.

As their name implies, thornbacks have numerous sharp spikes or thorns scattered all across the upper part of their body, and these can easily cause a nasty cut to unprotected hands. With experience, you can firmly and safely hold a thornback ray by gripping it at a point at the forward end of the body near the eyes while unhooking or photographing. Until you know exactly where this spot is, it is advisable to wear a pair of gloves.

The breeding cycle of the thornback ray starts in spring when mature females move inshore. Egg capsules are laid between March and August, with the embryo taking up to 20 weeks to hatch. The egg capsule is oblong, with long horns at each corner, and is often found on beaches in summer and autumn

Where And When
Traditionally, thornback rays used to start to make an appearance during the spring, with numbers of fish remaining abundant throughout the summer and autumn. Then they migrated offshore into deeper water with its more stable temperature for the cold winter months.

Recent mild winters have meant that thornbacks have remained inshore in many areas and are caught throughout the entire winter, meaning they can be targeted almost year round.

The most productive areas for thornback rays include the Thames Estuary, Solent, various estuaries throughout the south-west of the country, the Bristol Channel, Cardigan Bay, the Irish Sea and the various deep sea lochs off the west coast of Scotland.

These rays can be caught over a range of different types of seabed. However, they appear to be concentrated in areas where the bottom consists of a mix of mud and sand. They can also be found in patches of rougher ground, especially in coloured water typically within the vicinity of estuaries. They can be caught in water ranging from just a few feet deep to well over 100ft.

Tackle For Catching Thornback Rays
Usually, the optimum tackle to use for thornback rays will be dictated by the ground you are fishing.

Uptiding is a favourite technique, given that the species is especially common throughout the lower reaches of estuaries and sand, mud and shingle banks.


Generally, uptiding rods must be capable of casting 4-8oz lead weights and your bait away from the boat, with the power to handle big fish in fast tides too. Match your rod with a casting multiplier, such as the Penn 525 GS Mag3 or Abu Ambassador Power Handle 6500, or strong fixed-spool reel loaded with 18lb mono line.

In deeper water, fishing downtide is also very effective. You may be able to get away with a 12lb-class boat rod, but strong tides often require a 20lb or 30lb-class version. Use a lever-drag multiplier, such as the Penn Squall Lever Drag 2 Speed, loaded with 20lb braid. In places with the stronger tide, you may need 30lb braid.

For the more adventurous, fishing in places like the Thames Estuary, it’s possible to fish light using a 10-40g spinning rod and fixed-spool reel loaded with 20b braid for both uptiding or downtiding. 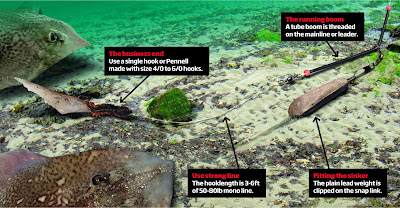 
Rigs For Rays
The tried and tested running leger is the perfect sea rig for both uptide and downtide fishing for thornbacks. Start with a boom sliding on either the mainline or leader, followed by a bead that acts as a buffer, and then a small, strong, swivel. Attach the hooklength to the other side of the swivel. This should be around 3-6ft of 50-80lb monofilament line.

Thornback rays do not have teeth, but they do have incredibly strong, crushing jaws designed for dealing with crabs and shellfish, which will make short work of thin monofilament. Their round shape means they offer considerable resistance in a run of the tide, which can result in inadequate hooklengths snapping.

Depending on the type and size of bait, the hooklength should terminate in either a single sea fishing hook or a Pennell rig (two hooks in tandem). Hooks such as Sakuma 545 Manta Extra in size 4/0 to 6/0 are perfect.

Bait For Thornback Rays
Thornback rays can be, and often are, caught on almost any type of sea fishing bait, although crustaceans and fish form the bulk of their diet.

Top choices for the species are invariably fish-based, with a long, thin, fillet or chunk of mackerel being a popular choice. Herring, sandeel and launce and almost any other type of fish work well.

All types of shell fish are very useful, especially razorfish, clams and mussels. Over rougher ground, especially if fishing in coloured water within estuaries, a peeler crab is a very effective bait. Squid and cuttlefish will both catch plenty of thornies in most areas. Worm baits, especially king ragworm, also works well.

Method For Catching Thornbacks
Fishing for thornback rays is invariably a waiting game. Having located a good mark, you should be prepared to cast out or drop back your baits, and then wait. Of course, sometimes you will catch fish almost immediately, while at other times it will take some time for the fish to respond to the combined scent trail of several baits washing downtide.

The key when targeting thornbacks is ensuring that at all times the bait is fishing stationary and hard on the seabed. The thornback is a lethargic species of fish, and are not inclined to chase actively after their food.

When you do get a bite, it is important to remain patient and give the fish plenty of time to shuffle its way on top of your bait in order to eat it. Trying to set the hook too early is probably the biggest reason that most ray bites are missed. Usually, it is best to wait until the rod starts to bend as the fish, having taken the bait, attempts to swim off, at which point you simply set the hook by firmly lifting into the fish.