Which Floatant For Dry Fly Fishing 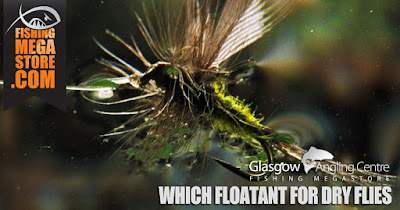 A bewildering choice of fly floatants exists these days. In fairness, they all perform well though it’s important to select one for the job at hand. For example, large dries stripped through wave tops on a blustery day can quickly become swamped. Here, liquid and aerosol floatants readily cover the whole fly, providing all-round protection, so they float for longer. While this indiscriminate application might be considered useful for the above situation, trying to treat a specific part of a fly, like an emerger pattern, for example, calls for a very different type of floatant. Naturally, there are countless other scenarios too, which are discussed in more detail here, allowing those who are starting out to make an informed decision. 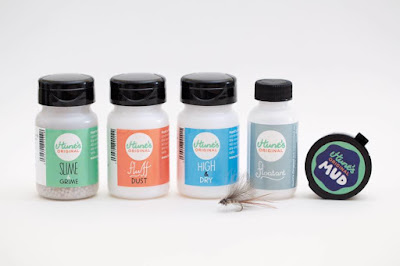 Sprays
Very much like liquid floatants, aerosol sprays tend to be haphazard in their application. In many ways  they have a similar use, making them perfect where a fly needs a complete coating. Given this, you might well question whether to use a spray, or a liquid. Sprays are invaluable when you’re afloat, and the boat is bobbing around because trying to thread your fly into the narrow bottleneck of a liquid floatant can be challenging. Conversely, if you’re on an exposed shore in a raging gale, training a jet of spray onto your fly can seem impossible, making liquids your first choice.


Dry Fly Powder Shakers & Revivers
Some might consider powders as their first defence when proofing dry flies before fishing. However, they’re far more valuable for reviving tired or sodden flies, especially the more delicate dressings like those comprising mainly of Cul de Canard for example.

While the shake-type canisters work exceptionally well, it's worth considering those that include a small brush as well, which can be used to probe deep into the base of a hackle or CdC wing to remove any residual moisture.

After landing a fish, your dry fly should be thoroughly rinsed with water to remove unwanted slime. Excessive water is then quickly removed with a false cast or two. Pop your fly in the bottle while being mindful to locate your leader in the tiny recess found at the bottleneck (above). This will prevent any kinking in your tippet once the lid is closed. A vigorous shake causes fine particles to dust the fly and absorb any remaining moisture. Often, your fly appears white when retrieved from the bottle, but there’s little need for concern here as false casting to lengthen line shrugs off any excess powder. CDC should be further revamped using the brush to agitate fibres (above image).

Gels
Gels generally come in slender tubes, with some form of nozzle, the most obvious being ‘Gehrke’s Gink’. Regardless of brand, generally, a tiny amount of gel is deposited onto your index finger. This is then massaged between thumb and finger to liquefy before anointing the required part of a fly. Rather surprisingly, when applying gel-based floatants the more frugal you are the better, as liberal amounts not only clog up materials, but an oily slick initially surrounds your fly after casting out.

Low riding flies and emergers in particular benefit from gels as specific amounts can be applied to certain parts of a fly, a perfect example being something like a Klinkhammer when you want the body and thorax to become submerged. Naturally then, only the wingpost and hackle should be subjected to any treatment. One thing to be mindful of with gels is they readily melt on warmer days, turning instantly to liquid. If housed upside down on your vest or bag sometimes there’s a tendency for them to leak, which is not only wasteful but messy too. For that reason, it is recommended to store/carry with the nozzle uppermost.


Liquid
The idea of liquid-based floatants is to dunk your fly in a bottle of the stuff, before shaking vigorously to ensure a complete coating. Any excess liquid is easily removed by a couple of false casts, which also dries the fly off. As mentioned earlier, in fairness, liquid floatants render the whole fly waterproof, which is all well and good where buoyancy is the order of the day. Such an application is handy when tripping bushy wets through wave tops on blustery days. They are also useful for the likes of Muddler patterns, or deer hair Sedges, especially where a fly that creates disturbance is required and needs to stay afloat for extended periods.
Some liquids come with a convenient brush – the idea being that floatant can now be applied to only a certain part of a fly. However, being ultra fine in their consistency, liquids tend to bleed into the remainder of the fly, no matter how diligently you attempt to apply the said liquid. For this reason, try to refrain from using them on any flies that are designed to sit in the surface film, or partially below it.

Watershed
Watershed is a liquid-based treatment that apparently offers permanent waterproofing to dry flies. Because a 24 hour drying period is recommended, it is best administered at the tying bench way before you’re thinking of heading out. If you prefer to buy commercially-tied dry flies then these should be treated with Watershed as a job lot on arrival. Once a fly becomes waterlogged, it’s a case of drying with Amadou and you’re back in business.

Grease Paste
Silicone Mucilin is perhaps the best-known grease that comes in a fairly solid form. One advantage here is a workable consistency during sweltering weather. Conversely, on raw spring days this silicone can appear like a block of refrigerated lard, making it nigh on impossible to administer. It then requires a fair bit of manipulation between finger and thumb to get the best from it.

Mucilin grease is excellent, especially when treating hackled dry flies, or those dressed using deer hair. Care needs to be taken to not apply in a lumpy form, which only glues fibres together, rendering them useless and often sinking your fly! Once a coating of paste or grease has been applied, using your finger and thumb, gently stroke the fibres in the opposite direction, against their natural resting position (above right). This causes individual fibres to flare out, while also parting any matted hair or hackles.

Amadou
Although not strictly a treatment as such, Amadou is a natural fungus that – if properly cured – has a soft, pliable and spongy character, not dissimilar to chamois leather. It is highly absorbent and therefore is desirable for removing moisture from sodden flies, especially those consisting of CdC. The main thing is to rinse any fish slime from your fly. Once done, a flick with the rod rids your fly of excessive water. Only now should you place the fly between two folds of Amadou. Take care not to overs queeze here and just be patient by allowing the fungus to blot away any remaining moisture.

It can’t be stressed enough the importance of taking good care of a quality Amadou patch, as once they become slightly damp (mainly due to inclement weather) they deteriorate extremely quickly to the point of becoming useless.

The key is to use this substance sparingly, as too much liquid only serves to clog delicate fibres and compromise floatability. A film of oil smeared on your index finger is more than adequate. This should be stroked in delicately. Administered correctly there will be no matted fibres and the CdC wing should appear no different.

Understandably this treatment only lasts for so long, or until the fly becomes ‘slimed’, due to a hooked trout. In such circumstances thoroughly rinse the fly before drying with a combination of a few false casts and amadou. It’s vital that the fibres are totally moisture free, before you apply another film of CdC oil. 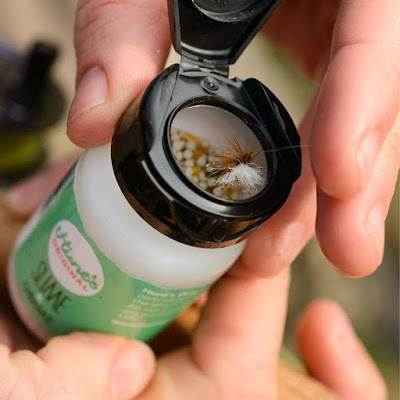 If you would like to know more about floatant and how to apply it correctly please don't hesitate to visit us instore at Glasgow Angling Centre or Edinburgh Angling Centre.  You can also call us on 0141 212 8880 where our friendly helpful staff will happily advise you.