Posted by Gary Wingate on February 26, 2016
We are pleased to announce that Open Weekend favourite and top fish artist, John Edwards from Fish Recreations, will be once again attending our Open Weekend Event on the 4th, 5th and 6th of March 2016 and following on from previous years success he will be exhibiting a new selection of his amazing works of fish art, many of which he has made specifically for our show!
Fish replicas are growing in popularity over more traditional fish taxidermy and due to their more versatile and ornamental format, are often bought as artworks even by those who have never caught a trophy fish! Why choose a replica from Fish Recreations? There are many advantages to choosing a replica over a traditional taxidermy mount, the most obvious being that the fish is released to fight and grow another day. These days big fish are becoming harder to find, and some species are in decline with strict catch and release policies now in force on many waters worldwide.
Once a mould has been taken from a dead specimen, a countless number of casts can be taken from that one mould, meaning no more fish of that size need to be taken from wild stocks. Fish replicas have been made in the USA for many many years,resulting in a huge choice of casts (blanks) to choose from. There is no ugly shrinkage or grease bleed associated with some poorly done traditional mounts, all Salmonid and salt water species are notorious for "grease bleed as their heads and bodies are packed with natural oils that are all but impossible to remove completely, If undertaken at all, skin mounts of these species in particular should ideally be built with artificial heads and adipose fins. Also there is no fungus, insect infestations, smells or other deterioration that is often associated with some traditional fish taxidermy mounts.
A good fish replica will be indistinguishable from a traditional fish mount, in fact it will often look even better! Replicas are also much more robust than traditional mounts, handy when life hands out knocks and bumps, and in most cases there is no need for additional expensive covers or cases (depending on type of habitat base) and pricing is often much lower compared with traditional fish taxidermy.
John says "I have always liked making things, and since I can remember I have drawn and painted, I am self taught apart from an "old" A in 'O′ level in art at school. (That shows my age!). After years of doing commissions part time on my art work I gradually became less motivated, I needed some thing more. As a keen fisherman I happened to chance upon an American web site with someone selling Fish replicas, I was hooked! This combines model making and painting, plus most anglers practice catch and release, (apart from "edible" fish such as trout and salmon). Most species are available as part built models from the USA; these still need lots of work done on them using dermal type tools and epoxy resins etc to get them ready to paint. Then I have to construct the base or diorama. To make replicas from actual fish, rocks, plants etc I had to learn the basics of moulding and casting in numerous materials, (I am still am learning) I use numerous types of materials. For painting modern day paints are a joy to use and I use a leading brand of Acrylics, plus the appropriate mediums. The result is a model fish that should last more than a life time." 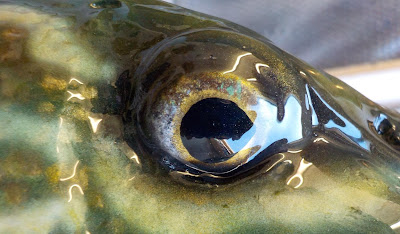 With Fish Recreations you can have your catch of a lifetime "caught" in incredible life like detail, even though your fish was returned safely to the water. Usually all that is needed from you are a few measurements, and one or two photographs of your prize before you return it to the water to enable John to match your fish species and size exactly.

Each commission is completely handmade and painted, and some works can take many months to complete. Time is not taken into consideration with this type of artwork. Check out the photos on their website or popular Facebook Page to see the stunning attention to detail for yourself! We also have a selection of Johns work on display instore for all our customers to see all year round should you like to view one in person!
There really is something for everyone at these events, that's why they are the biggest in Scotland - and this one promises to be the biggest ever! With FREE parking and FREE entry, there will be loads of things to see and do on the Open Weekend dates as well as some amazing bargains on all types of fishing tackle. Keep an eye out on Facebook, Twitter and instore for more info on what's going on at this event! Plus don't forget to register for your FREE GIFT on the day! Click HERE for details!