Posted by Fishingmegastore on October 15, 2015 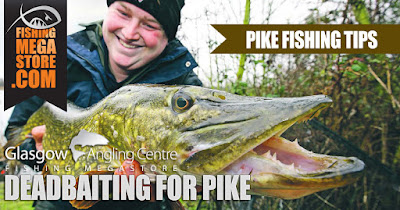 You can catch Pike throughout the year with lures, but October is a pivotal point. With the water temperatures falling to more conducive conditions for pike, it's time to focus on deadbaiting.

Live bait and lure fishing are effective methods, but for some top anglers, deadbaiting is the number one tactic on many venues when October rolls in. A well-presented, fresh, deadbait has as much chance of catching a big pike as a live fish. Deadbaits are also more convenient to use than live fish.

Just as with any bait, though, you will be rewarded for sourcing the right deadbaits and making sure they are as attractive to the pike as possible.

The strange thing, to which many top pike anglers will attest, is that smaller deadbaits appear to be much more effective than larger ones, especially for bigger pike.

The assumption is that pike are able to pick up these smaller baits more easily, and that in actual fact, within reason, pike are just as likely to find a small bait as they are a larger one. There are many venues where the pike have been caught before, so naturally, they will start to shy away from larger baits.
Fishing smaller baits also make life much easier for the pike angler. Weighing just a couple of ounces, such baits are easy to rig and can be cast some considerable distance if required, without the heavy pike fishing rods and lines needed for big baits.

Top Deadbait Tips
A simple way that you can increase your pike catches, especially at this time of the year when a lot of venues still contain quite a bit of weed, is to use a buoyant bait that is popped up offˆ the bottom.

Freshwater baits, such as roach and pollan, are normally naturally buoyant, but sea baits will usually need some form of buoyancy aid to get them oˆff the deck.

While a cork stick inserted down the throat of the bait is a tidy way of adding buoyancy, this does require that the bait is defrosted. A common solution is to use a foam polyball or poppers attached to a short length of rigging wire which can either be tied directly to the top treble hook or threaded through the bait using a stringer needle.

If weed is present then very often you can present the deadbeat fished the whole length of the wire trace oˆff bottom, so that the bait is still visible above the weed. This makes the bait much easier for a pike to find, and will greatly increase your catches.

If the lakebed is clear of weed, though, it's better to have the bait just standing on its tail. This still makes it highly visible but keeps it closer to the depth where most pike hunt, which tends to be no more than a foot or two offˆ the bottom.


Chumming a swim is also an effective tactic when used in conjunction with deadbaiting.  A finely-chopped mixture of fish socked in pilchard oil would send out a massive slick of attraction, and on windy days the undercurrent would carry this for some distance. Given time, a chummed rod can out-fish an un-chummed rod by quite a margin throughout a day.

Deadbaits aren’t cheap, but when the time is limited on the bank, and you are looking to catch as many fish as possible it makes no sense to fish with the same baits all day. It's recommended that you change baits at least once an hour, more often if you are regularly recasting, as baits have the most appeal when they are fresh, and straight from the packet.

This article was brought to you in association Angling Times.