Posted by Fishingmegastore on September 11, 2015 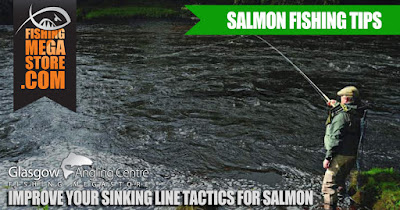 When it comes to salmon fishing, there are many competing theories regarding the best way to present a salmon fly. Some argue that the fly should be presented at the end of a long straight line, cast at roughly 45 degrees to the current. Such a method ensures the fly is fishing from the moment it touches the water. However, some highly experienced salmon anglers advocate casting a sinking shooting head square to the stream on slack line. So which method works best?

With the long, straight cast, there are a few advantages. Bringing the fly line and leader under immediate tension when they touch down is mostly associated with fishing the fly close to the water surface. It can also be used with sinking lines, but it inevitably limits the depth to which the fly line and fly can sink. The solution is to employ "drift" into the process.

By introducing “drift” under minimum tension between the cast and the fly starting to fish, it will allow the unhindered sinking head (or sinking tip) to do what it’s intended to do – sink, and take the fly down with it. So, when the line finally comes under tension, causing the fly to start fishing, they have already achieved a satisfactory depth – rather than starting at the surface. However, the question is, how do you achieve that controlled drift under minimal tension?

There are many tricks the salmon angler can employ. Firstly, the aerial mend. Imagine you are on the left bank, standing on a clock face, with 9 o’clock pointing straight downstream, 12 o’clock being at the opposite bank, and 3 o’clock being upstream. To allow for the drift, cast almost straight across – say at 11.30. Next, while the running line is still shooting through the rings, ease the salmon fly rod upstream so that it is pointing at about 1.30. At the same time, gently raise the rod tip to about 45 degrees from the horizontal.

As soon as the line leaves the water, reverse the process. That is,easing the fly rod back through 12 o'clock while gently lowering the rod tip – all at just the right pace to ensure the line drifts under minimal tension. Finally, with the rod pointing at about 11 o’clock, the line, which has been sinking throughout its drift, comes under tension and the fly starts to fish.

Another way of extending the drift is to hold back a couple of yards of the running line. Let this go a second after the line has touched down, allowing a shortish drift for the line and fly to sink.

So extending the drift has been established as an effective method for optimising the fly's fishing time. Then there is the question of when you move downstream between casts? How can drift still be achieved?

Most people draw in running line on the dangle, move a yard or more downstream, and then make their cast. But in order to extend the all-important drift, it is better to draw in line, cast, and then move downstream. Of course, this is much easier when you are wading on a clean, gravel riverbed. With trickier conditions underfoot, it might be a case of cast, grab your wading stick and then proceed with caution.

So whatever method you employ, controlling the depth and speed of the fly is critical, and pivotal, to your success. A long, straight line, some would argue, ensures the fly is fishing as soon as it hits the water.  However, if you want to prolong the drift, therefore maximising the depth at which the fly starts fishing, employ the aerial mend and rod drift, release a couple of yards of retained line, and move downstream all at the same time. Where conditions dictate, and where you don’t want or need the line and fly to swim too deeply, you might ignore all of these methods, or employ just one of them. The key thing is knowing where and when to do what.  That's what sets the successful sinking line salmon angler apart from the chuck-and chance-it angler.

This article was brought to you in association with Trout and Salmon Magazine.