How To Catch Trout During A Caenis Hatch 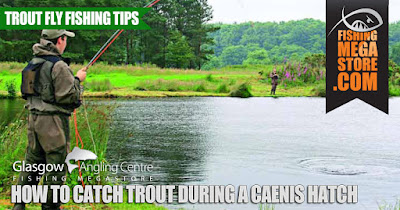 Kown as the ‘Angler’s Curse,’ our smallest upwinged species, the Caenis, begin to appear throughout June. Equating to a hook size of about 20-24 (depending on species) these white upwinged flies are positively tiny. Their emergence strikes fear into many fly fishers, and when you factor in the blizzard-like hatches, you can see where their reputation came from.

When there is a hatch of Caenis, the trout gorge themselves and become pre-occupied, making it difficult, nigh on impossible to tempt them with anything. Fly anglers try everything in their arsenal but it's as if the fish have been hypnotised to reject anything else!

Thankfully, armed with a suitable imitation and a high riding floating fly line, it’s not all doom and gloom. Unassuming and straightforward it maybe, and contrary to your belief that "nothing works," trying the small hackled Caenis Dun pattern generally unlocks the door to seemingly fussy fish come Caenis time.

Tying the Caenis Dun
Most people shy away from small hooks as fear surrounds beginners and even seasoned tyers when it comes to dressing flies on them. Where most people go wrong, however, is attempting to tie fussy, intricate patterns on the tiniest of hook shanks, which is asking for trouble.  The secret is keeping things simple and uncomplicated. This pattern merely consists of tail, body and hackle, that’s it.

In the interest of keeping bulk down, Trico 17/0 thread certainly helps, but all tying procedures should be kept to a minimum too. For example, after initially catching in your thread, trap the tailing fibres in as you lay down a thread base. These are then separated and locked in place with a tiny dab of Superglue.

A thread body eliminates bulk, which means you can afford to create a slight taper to the abdomen by a slight build-up of fly tying thread. This is protected with a coating of fine varnish that instantly soaks into thread turns.

You could get away without a thorax as such and just rely on hackle turns instead. That said, the thoracic region of Caenis duns is often quite dark, making it more pronounced. Therefore it's worth imitating with a small amount of dubbing. Dubbings don’t come any finer than mole’s fur and it’s exactly the right colour too! Keep the hackle relatively sparse and remember to cut a ‘V’ in the underside, to render it low riding.

Equally, with the hackle clipped flush on the underside, it doubles up as a spinner pattern when female Caenis return to egg lay.

How to Fish the Caenis Dun
Generally speaking, a Caenis hatch in full swing sees trout topping everywhere. Understandably, it’s easy to adopt a scattergun approach by simply casting out with your floating fly line in the hope that sooner rather than later a trout will find your offering. This does work to a degree, but a far better ploy is to single out individual fish and try to target these.

Granted, it's easier said than done, however, the most intense activity usually occurs over calm water where duns littering the surface are easy pickings for trout. Try moving to where a light breeze ruffles the surface. Here, fewer flies and consequently trout tend to exist. Chances are these will track into the wind, making it easier to anticipate their path of travel. Equally, more broken water helps mask a landing fly and ultimately any leader indentation often making fish that bit more tolerant of our presence.

Always fish the Caenis Dun on a knotless tapered leader with a very fine tippet - the finer the better.  A thick leader on a small, size 18-20 is not going to look natural to the fish.

The dreaded "Angler's Curse" is a challenge and triggers an automatic 'defeatist' response, however, if your are willing to be a bit more tactical in your approach, willing to remain positive, and choose to be confident in your Caenis Dun, you will engage with more fish.