Posted by Gary Wingate on February 22, 2015
The fly tying demonstrations are always one of the most popular part of our Open Weekends and the next one coming up on the 6th, 7th and 8th of March 2015 will be no different! Our new instore format will be bringing more of the countries top fly tyers, sponsored by Veniard and supported by Partridge, Guideline and Fulling Mill, making this the premier fly tying event in Scotland! All of these tyers are at the top of their game and will go out of their way to show you how to perform the latest techniques and how to tie any style of fly you can think of. They will even take the time to guide you round our massive fly tying department and help you to choose the right equipment and materials, so don't miss out and come to Scotland's biggest FREE angling event!


David Edwards
David  has always been fascinated by Pike fishing, but it doesn't stop him from fishing for other species. He will use most legal means of catching fish but his favourite and most successful method has to be fly fishing. David is best known as the man who popularised the use of modern UV curing glues in UK fly tying and made them available to the masses under the Bug-Bond brand. he will be demonstrating the various methods and uses he has found for this innovative product and all Bug-Bond products will be available for purchase instore. http://deesox.blogspot.com/

Paul Procter
Best known for his prolific writing and perfectly tied flies in Trout & Salmon and Trout Fisherman, Paul is a qualified AAPGAI instructor at Masters level and is regarded by many to be one of the top fly tyers and casters in the UK. Based in Cumbria, with over 30 years fly fishing experience, Paul provides first class guiding, fly casting and fly fishing tuition to all levels and abilities and as well as offering knowledge of his home waters, he is equally experienced on rivers, stillwaters and saltwater throughout the UK and abroad. Paul also specialises in hosted trips to destinations all over the world, targeting species such as wild Brown Trout, Grayling, Bonefish, Tarpon and Permit in locations as diverse as Poland, Slovenia, Iceland, Bosnia, Mexico, New Zealand and even Scotland. http://paulprocter.blogspot.com/


Håkan Norling
Håkan Norling is a Swedish fly tying guru and the man behind the very famous "Templedog" style of tube flies for Salmon. He has been one of the biggest innovators for tube fly tying in Scandinavia and loves to fly fish Salmon and Seatrout. His favorite rivers are Alta in Norway and Em in Sweden and
reggae and punk music make him smile while his driving up and down the roads in Norway and Sweden where he works for top Scandinavian fly fishing brand Guideline! http://www.guideline.no

Paul Little
Paul's passion is for dressing salmon flies, especially the classics. He enjoys dressing the grubs, Spey flies and those flies that most people have forgotten but he still ties a mean Blae and Black and enjoys tying saltwater patterns too. In recent years he has given both salmon and trout fly workshops in the US and the UK and enjoys the experience very much. The important thing to Paul is mastering the basic techniques and having done so, to disseminate those skills for the benefit of other Fly dressers. http://paullittleflydresser.wordpress.com/

Craig McDonald
Craig is a well known face on the Scottish river fly fishing scene and is a dab hand at tempting wild Brownies from stillwaters too! Demand for his flies, including the deadly 'Duracell' pattern, has been growing in the last few years, so much so that he is now a consultant with top fly supplier Fulling Mill - putting his flies in the hands of even more anglers and accounting for many Trout and Grayling up and down the country and even in the rivers of Europe! This will be Craigs first time tying at one of our events and we are sure you will all give him a warm welcome!

Dave Downie
Dave Downie is a well known Scottish competition angler and has fished for his country many times in both the rivers and the loch teams at home and abroad. After many successful years in the scene with many competition wins under his belt he now ties flies, produces fly tying materials and guides clients all over Europe. http://www.davedowniefishing.com/ 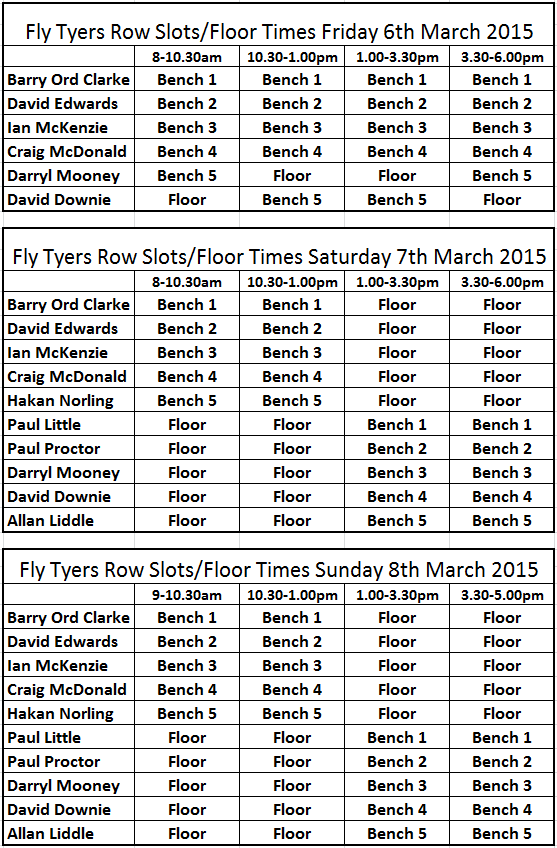 Check out our fly tying schedule, so you can plan your visit and catch the tyers you want to see over the three days - plan ahead and don't miss your favourites!