Posted by Fishingmegastore on November 12, 2014 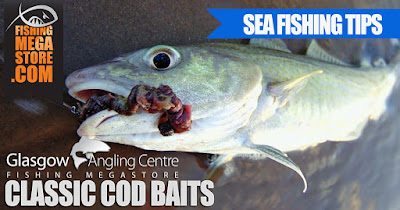 When it comes to cod fishing, you might have the right sea fishing tackle, but if you are using the wrong sea baits, then it can be a bit more challenging. With a little thought and effort, you can achieve better results, and therefore want to go back to the shore more often.

The key thing is the scent. If you can deliver a huge scent trail in a relatively small package that can be cast very easily, you will be much more successful. A cod's highly tuned sense of smell is mainly based on a set of well-developed nostrils located on the snout. As water moves in through the snout, usually by a pumping action caused by the fish's breathing, cod can detect key substances such as amino acids and bile acids.

The best baits for releasing the best scent trail for cod include black lug and squid.

Black Lug and Squid Cocktail
The lugworm and squid cocktail is a classic winter cod combination that has proven itself all around the UK. This presentation is just a variation of that classic bait, but one that is simple and quick to prepare – ideal when your hands are nearly frozen in that cold winter wind. This particular bait is geared for targeting big cod from the boat, hence the use of a single size 8/0 hook tied to 80lb mono. That’s pretty much a standard set-up along the south coast because you quite often have to deal with conger eels picking up the bait instead of the target species.

The Lugworm Sausage
This is the shore anglers’ favourite, delivering a huge scent trail.  It’s also a winner when uptiding in the many estuaries and shallow water marks around our coast. The Lugworm sausage has been around for a long time and it catches a lot of cod and bass. You can use this method to present fresh lugworms too, although it can get quite messy with the huge amount of juice leaking out. It’s better suited to freshly gutted or frozen black lug.

Hooks: These must be strong. The Varivas Wide Mouth Extra and Sakuma Manta wide-gape patterns fit the bill, being ideal for Pennel rigging whole squid baits. If you intend to fish multiple squid baits, use the O’Shaughnessy in sizes 8/0 to 10/0.

Mainline: Braid is best suited to deep water and strong tides. For the south coast, you’ll need at least 30lb braid and a shock leader.

Swivels: Good-quality swivels, such as those produced by Berkley, are needed to prevent line twist and to hold together without breaking.

Leader: A leader knot is an added weak spot and somewhere for weed to accumulate. Cod have been lost because of being unable to wind any more line on the reel due to weed on the knot. If you would prefer not to use a leader, make sure you go for 30lb braid straight through for downtide fishing, and 25-30lb if you are uptiding.

Sinkers: You may hold the bottom with an 8oz weight on a normal tide, but when there is weed pushing through, you’ll find it hard to hold with 1lb.  If uptiding, take breakaway leads from 150g to 210g and fixed-wire leads to 14oz. A selection from 6oz to 2lb is ideal for downtiding.

Big baits: The lug and squid cocktail is a proven cod catcher, especially when uptiding in estuaries. For monster cod in deeper water, use a squid, cuttlefish or live baits.

Uptide and downtide: In shallow water, you can get away with up tiding using a good quality uptide rod. However, there are occasions when only a downtiding will do, so you’ll need a 20/30lb-class boat rod.

Reel: The combined weight of a hooked fish and tide is huge – even a 10lb cod can test your gear when it opens it’s mouth in a two-knot tide. Choose a multiplier reel that has the gearing and guts to cope with this heavy weight.