Posted by Fishingmegastore on October 23, 2014
Based on a sketch of stylised wingless birds, and later made into a game, the Angry Birds franchise has been a huge phenomenon.  They have been dubbed "one of the great runaway hits of 2010," so what better way to introduce that same fun factor into fishing by creating a range of lures based on Angry Birds characters! 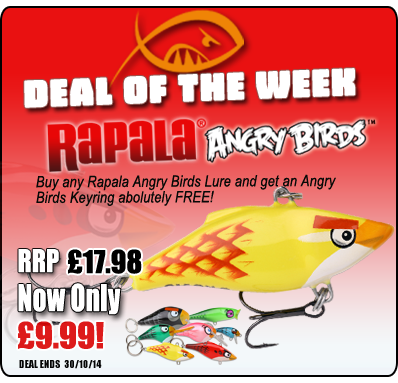 The range includes: DT Dives-To Pink, Mini Fat Rap Blue Bird, Rattlin Yellow Bird and Skitter Bad Pig, each with it's own distinctive colours and characteristics.  For example the 'Rattlin' Yellow Bird is a nippy little customer with a streamlined, cone-shaped head that allows it to zip through the water.  But don't let the 'cartoon-like' appearance fool you into thinking that fish will see this as a joke!  On the contrary.  Rapala Angry Birds Lures have a superb action in the water and are deadly, especially for Trout, Perch and Pike!  In fact, given their superb fish catching capabilities, you may find them more addictive than the game!!

This week only, you can buy any selected Angry Birds Lure and receive an Angry Birds Keyring worth £7.99 absolutely FREE.  So don't miss out and grab your Angry Birds Lures (if you are fast enough) while stocks last!