Posted by Fishingmegastore on August 14, 2014 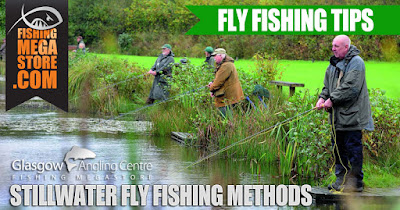 When starting out on a stillwater fly fishing session, there are so many factors to consider before your first cast, such as the time of year, water clarity, the temperature of the water, wind direction, the depth of the water you are fishing, whether fish are moving on the top, and so on.

But as a general rule, a lot of the top competition anglers would initially start by fishing lures, for example, a Tadpole, Cat's Whisker, or a Hot Headed Damsel on an intermediate fly line (see diagram 1). Make a steady figure-of-eight for half the retrieve then apply a faster strip for the last half of the retrieve. The mobile marabou tail or wing of the lures and the change of speed in the retrieve should induce any fish into the take.  Another deadly fly to consider is a Goldhead Blob Squirmy using short sharp pulls.

If you were fishing early or late in the season, a conventional approach would be to fish a Black and Green Booby on a Di-5 fly line (sinking at five inches per second) and a six-foot leader as the fish will be very close to the bottom (diagram 2).

In both these scenarios, give the lures approximately 15 minutes before changing. After each cast, ensure you leave the flies to 'hang' before lifting them out of the water because fish frequently strike as soon as you lift the fly rod to re-cast. 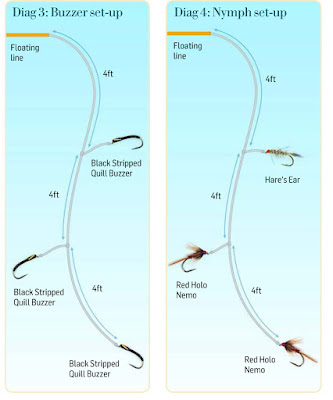 The next approach would be nymphs fished on an ultra-slow retrieve on a floating line or midge-tip fly line. In the summer months, you could try three Black Stripped Quill Buzzers on a 12-foot leader, all spaced four feet apart (diagram 3). At any other time of the year, another method would be to fish a Red Holo Nemo (one on the point and one on the middle dropper), and a Hare's Ear Nymph on the top dropper (diagram 4). Again a slow figure-of-eight retrieve is all that's required.

If the water is shallow or the fish are feeding in the top six feet then substitute the Nemo on the point for a small-eyed Cat Booby and fish the washing-line method (diagram 5) – ensuring all the flies are kept high in the water. Again, apply this method for around 15 minutes before changing.  A good tip when fishing the washing line is to apply a long, slow pull which will lift the flies up toward the surface, but then let the flies drop back down naturally as this will trigger a strike.

If after 30 minutes there have been no takes to the lures or the nymphs, move around the water to try and find the fish, and repeat the process: firstly with the lures and then using the more subtle approach with the nymph set-ups. Having two rods for this purpose would be a huge advantage, and would prevent you from having to change your whole set-up.

If you have fish in front of you, and you are presenting the right fly, at the right size and colour at the proper depth, a response will be almost instant, or indeed within the first few casts. It may not always result in a take, but you should have some sign of a follow or a swirl. It is then just a matter of fine-tuning your methods and tactics until you convert these follows into takes.

There will be times when things get challenging, and it is easy to lose confidence. However, it is essential that you maintain a positive mindset and keep mixing things up. By exploring the depths, thinking outside the box, and trying different methods, you can still winkle a few fish into the net. If you do catch a fish after a long slog, carefully marrow spoon the fish and try to establish what the fish are feeding on. Then use a suitable imitation of the right size, pattern and colour at the depth you caught the fish.