How To Fish For Mullet 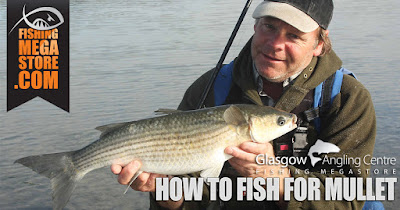 Lots of sea anglers catch Pollack, Mackerel, Cod, Bass and a plethora of common species on a regular basis, and if you are an LRF angler, you may have an impressive list of species ticked off. However, some may never have caught a Mullet. The reason for this is because the species does not fall easily to the heavy tackle techniques used by shore anglers. For Mullet, you need to scale down to finer tackle, and when you do connect with a fish, you’ll end up having a fight you won’t forget.

Mullet is one of the world's most common fish species and are found in all the oceans of the world. In the UK there are three common types: Thick-Lipped Grey Mullet, Golden Grey Mullet, and Thin-Lipped Mullet. Thick-Lipped Grey Mullet is the primary species found in UK waters and is the largest of the Mullet family. They can be found in harbours and marinas and can grow up to double figures. Golden Grey and Thin-Lipped Mullet are separate species, although great confusion exists over their identity because of the golden cheek patch on the Golden Grey is also apparent, although less bold, on the Thin-Lipped. The Thin-Lipped is not so widespread around the UK as their main stronghold is the English Channel and in South Wales.

Both the Thin-Lipped and Golden Grey have a slimline body compared to the larger Thick-Lipped Grey Mullet, and both have the same habits and behaviour. However, they are far less shy regarding tackle. They can be aggressive when it comes to eating small Ragworms making them a fun species to fish for with light tackle.

Most marinas and harbours have a summer population of Thick-Lips, while piers, estuaries and rock marks can attract regular high-tide shoals. Being a sensitive and instinctive species of the surface layers, Mullet is shy, so dawn and dusk are always the time to find them at their boldest. On piers, the tide and high wall lessen the Mullet's shyness, while the more remote rock locations will see the species more active throughout the day.

Catching Mullet
Catching Mullet requires a more deliberate, refined approach akin to coarse fishing. The species has highly tuned senses and can see fishing line and fishing hooks just as well as their freshwater cousins. They shy away from heavy tackle, noise disturbance and movement. The best approach is to use light gear including line, small hooks and a slightly beefed up coarse float such as a pellet waggler.

A sliding float rig will allow you to cast and fish deeper, which a fixed float rig will not. The float runs on the line via a hole, and a stop knot fixed on the line keeps it in position. The stop knot can be a simple three-turn grinner knot in mono, and this will slide on the mainline into the position you require. The slider allows you to change the depth instantly, especially with altering tides.

In shallower and sheltered conditions a fixed waggler float will work well, but in the main, a slimline sliding float with a stop knot on the line to cock it is more practical for the open sea and deep water

From piers and walls, many anglers prefer a quiver tip, with the baits fished just under or close to a bread bag. A heavy coarse feeder rod is usually the first choice in this situation and a softer fibreglass tip will show bites. The Best choice of rig is a one-up, one-down mono paternoster. In a majority of cases, you won’t get a sniff if you fish with more than 10lb line, so 6lb line is the hooklength required, preferably a fluorocarbon leader. Hooks around size 6 and 8 are ideal, with the slimline chemically etched continental patterns best.

Bread is by far the best bait to use to catch Thick-Lipped Mullet, simply because the species is used to finding it and will take it off the surface in the form of crust. They will accept a flake of bread fished in mid-water or on the seabed. Just tear a flake off a slice of bread and fold it around the hook without squashing it too much. This allows it to soften in the water quickly and improves your chances of hooking the fish.

Other bait variations to try include using Mackerel flesh (without the skin), adding Mackerel flesh to bread, edible crab flesh, kipper, sardines and sandeel flesh. Even cheese, macaroni and others have been used successfully in some regions.

Thin-Lipped mullet will take harbour ragworms, also called reds, maddies or creepers. Fish these on a long rig in the surf with the hook baited with small bunches of the worms so that the tails hang and wriggle. An occasional lift and movement can induce a take. Thin-Llips can also be caught on a baited spoon. The best are the Mepps-type blade spinners baited with several mud ragworms and retrieved slowly.

If you want to outwit Mullet even further, use a groundbait comprising of boiled fish, such as Mackerel, Garfish or Scad, and mix this with chicken bran and bread. They also learn fast so catching one will alert the shoal, so a great tactic is to bait two different spots and switch between them after catching a fish. It's also worth netting your fish away from the feeding area.

So what are you waiting for? There are plenty of areas in the UK where you can catch Mullet, and the tackle is not as complicated as you think. Using a delicate approach and tackle more akin to coarse fishing is the way to go. The rigs are simple and the bait even more so.