How To Choose The Right Salmon Fly 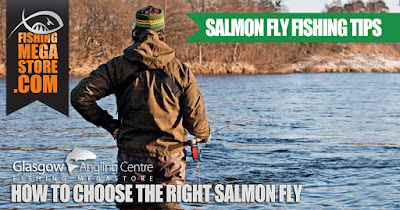 When you are salmon fishing, choosing the right salmon fly on a given day can be a challenge. You've paid good money and you want to maximize your chances of catching a fish. In making a decision, you have many sources of information. You could rely on good old traditional common sense, tried and tested patterns, you could take the ghillie's advice, or, you could trust your instinct and draw on your own personal experience.
When choosing a size and pattern of fly to suit the conditions, there are some general rules you can follow. For example, the colder the water and/or the stronger the current, then the larger the fly you should use. Equally, if you intend to fish the fly square and fast, you should generally opt for a larger size of fly. As to the pattern, most would agree that a "bright" fly works well in coloured water, while a 'drabber' fly is more suitable when the water is clear.

Many anglers would argue that it is counter-productive to think that on a given day, at a certain place, just one size and pattern of fly will do the business while others fail. Water temperature, air pressure, and speed of flow vary on a day to day basis and can affect the fish's behaviour.
On a fine day in June or July, successful flies might be small and medium-sized Cascades, a size 8 Ally's Shrimp, a size 6 Munro's Killer, and a Sunray Shadow with a 5 inch wing on a one and a half inch tube. Or, if it were late October or Early November on the Tweed, the winning patterns might have included black and orange on a one and a half inch copper tube, a Posh Tosh dressed on a one inch aluminium tube, a Cascade dressed on a small brass bottle tube, a Gold Willie Gunn dressed on a 2 inch aluminium tube, and a Temple Dog dressed on a short plastic tube with a tungsten conehead.
Some flows seem to shout out for a big fly, such as a Sunray Shadow or Collie Dog, fished square and fast. Others suggest hovering a much smaller fly across the Salmon's resting place. It is very possible that one fish in a pool might show a preference for one sort of fly, while another fish resting only a few yards away has a preference for something else. A running fish may require a very different fly from the resting fish.
Equally, certain patterns and sizes of fly do better for some fishers than others because of the way they naturally operate. For example, the salmon angler who habitually fishes his fly fast will probably do better with a slightly larger and flashier fly than the angler who likes to wade deep and cast his salmon fly line well downstream in order to reduce the speed of its swing.

So how do you judge which size and pattern of Salmon fly will be best on a given day? The honest answer is that it's very difficult to pin down. Instead, before you start to fish each and every pool, take a few minutes and have a think about the variables in front of you. Look at the flow and plan how you intend to fish. In making your choice, obviously, use common sense.  What line will you be using? Spey line, Skagit, or Shooting Head?  Also, don't neglect your gut instinct. If you are fishing half way down a pool and your instinct is shouting, "this is not happening," then try something else and make the change. You never know.